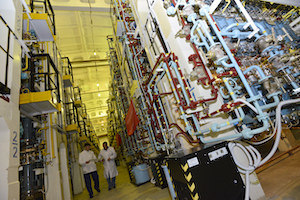 In 2021, the revenue from the sale of isotope products from Russia’s Electrochemical Plant (part of Rosatom’s Fuel Company TVEL) increased by 8% year-on-year, to more than RUB1.6 billion ($20m) for the first time.

Stable deliveries of isotope products to the world market are ensured thanks to the well-coordinated cooperation of ECP, TVEL and V/O Izotop, an industry integrator in the field of turnover and promotion of isotope products from Rosatom enterprises. One of the key events in 2021 was the supply of germanium-76 isotope for international scientific projects. Several modes of transport were used to carry out shipments under severe epidemiological restrictions.

A number of deliveries of molybdenum-100 were made for new foreign projects developing the technology for obtaining medical radioisotopes on cyclotrons. The obligations to supply zinc depleted in the zinc-64 isotope, as well as disks made of enriched iridium-191 to customers in Russia, Europe and the USA for the production of the radioisotope iridium-192 in reactors, one of the main isotopes for gamma-ray flaw detection, were fulfilled in full.

Joint activities by ECP and NPO Centrotech (another TVEL enterprise) continued to use gas centrifuge technology for the separation of zirconium isotopes. A product with an enrichment of more than 80% in the zirconium-96 isotope was obtained. This substance is planned to be used in the study of neutrinoless double beta decay of an atomic nucleus in the international scientific project SuperNEMO.

In addition, work continues on the creation of a site for the synthesis of C-13-urea, a product used for the manufacture of medical breath tests, which can be used to detect human infection with the bacterium Helicobacter Pylori (the main cause of stomach ulcers, gastritis and cancer).

Accounting for more than 40% of the world market, ECP has the competence to produce 110 isotopes of 21 chemical elements. The geography of deliveries covers more than 25 countries on all continents,” said ECP General Director Sergey Filimonov.