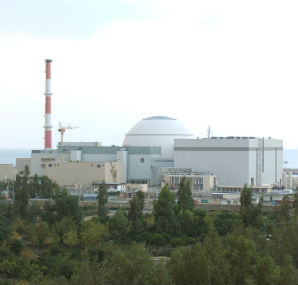 Delivery of the fuel will be made before the end of August ready for a planned maintenance and refuelling outage on 1 September. The fuel was manufactured at Russia's Novosibirsk Chemical Concentrates Plant.

Rosatom said that after the July 2015 agreement between the P5+1 (the USA, the UK, France, China, Russia and Germany, along with the European Union) and Iran, TVEL established an account in an Iranian bank to allow timely payments for fuel deliveries. The 915MWe Bushehr 1, a Russian-designed VVER pressurised water reactor unit began commercial operation in September 2013.

Earlier in August, Iranian Deputy Foreign Minister Seyyed Abbas Araqchi said Iran's nuclear programme includes production of nuclear fuel for six reactors within a 15 years. "Most countries' development plans are for 10 years, but we will probably present a 15-year nuclear development plan to the agency (International Atomic Energy Agency - IAEA), whereby, at the end of the programme, Iran will be producing 1 milion SWUs of nuclear fuel, which will be sufficient for 5-6 nuclear reactors," he told a parliamentary meeting. He noted that under the Joint Comprehensive Plan of Action (JCPOA), Iran will be restricted in manufacturing new centrifuge machines.

Meanwhile on 20 August, IAEA Director General Yukiya Amano issued a statement refuting press reports suggesting that the IAEA had given responsibility for nuclear inspections to Iran. "Such statements misrepresent the way in which we will undertake this important verification work" he said. "The separate arrangements under the Roadmap agreed between the IAEA and Iran in July are confidential and I have a legal obligation not to make them public - the same obligation I have for hundreds of such arrangements made with other IAEA member states." He added that the arrangements are "technically sound and consistent with our long-established practices" and "do not compromise our safeguards standards in any way."

Two days earlier, More than 70 of the world's leading nuclear nonproliferation specialists issued a joint statement outlining why the JCPOA "is a strong, long-term, and verifiable agreement that will be a net-plus for international nuclear nonproliferation efforts." The statement, endorsed by former US nuclear negotiators, former senior US nonproliferation officials, a former director-general of the IAEA, a former member of the UN Panel of Experts on Iran, and leading international nuclear specialists, urges the leaders of the P5+1 states, the EU, and Iran to take the steps necessary to ensure timely implementation and rigorous compliance with the JCPOA.