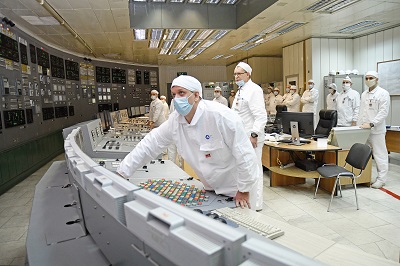 After 45 years of operation, unit 1 at Russia’s Kursk nuclear power plant was permanently shut down on 19 December.

The RBMK-1000 power unit was shut down to operate in a mode without generation and the relevant licence was issued by the Federal Service for Environmental, Technological and Nuclear Supervision of Russia (Rostekhnadzor). The unit was disconnected from the Unified Energy System of Russia without comment.

“During its operation since 19 December 1976, the unit has generated more than 251TWh of electricity,” said the Kursk NPP Acting Director Alexander Uvakin. “This is enough to ensure the energy consumption of the Kursk region for 30 years, given the current consumption. The unit has worked reliably and safely."

The general director of nuclear utility Rosenergoatom, Andrei Petrov, noted: “A new story begins for the Kursk station. Now the construction of a capacity replacement station for the decommissioned RBMK-1000 power units of the Kursk NPP is in full swing. New units are being constructed according to the most modern NPP project of domestic design, created by Russian designers based on  VVER-1200 technical solutions. The power units under construction with the VVER-TOI reactors will have increased power and improved technical and economic indicators."

Kursk II is the first project to use the VVER-TOI and will have four new power units with a capacity of 1300MW each. AEM-Technology (a subsidiary of AtomEnergoMash, Rosatom’s mechanical engineering division), the only Russian manufacturer capable of making a complete nuclear steam generator, is also the manufacturer for the VVER-TOI.