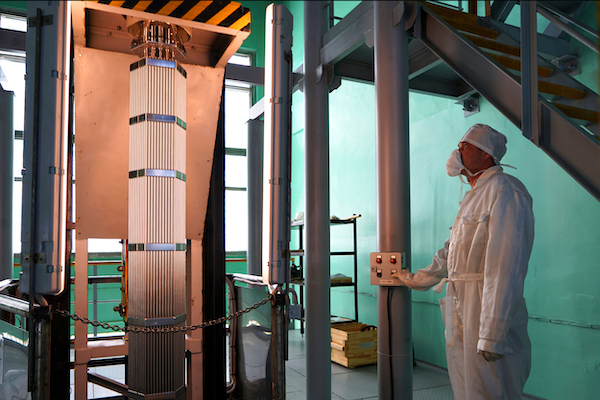 Each of the six fuel assemblies of the standard TVS-2M design consists entirely of fuel elements containing uranium-plutonium fuel pellets instead of traditional enriched uranium (one VVER-1000 fuel assembly has 312 fuel elements in its design), TVEL said on 10 November. The Remix fuel tablets were manufactured by Rosatom’s Mining and Chemical Combine (MCC) in Zheleznogorsk, Krasnoyarsk Territory.

The Remix batch must now go through a full cycle of pilot operation in a VVER-1000 reactor. Earlier in 2021, the Balakovo NPP completed the programme of operation using three experimental fuel assemblies, each of which contained six REMIX fuel rods.

Such a programme is fully consistent with the world practice of development and implementation of innovative nuclear fuel, when first several experimental fuel assemblies with experimental fuel rods are loaded into the reactor (the LTR programme - lead test rods) followed, at the next stage, by several assemblies entirely consisting of the new fuel elements (LTA - lead test assemblies).

“The LTR program at Balakovo NPP was successfully completed in 2021, with post-reactor studies of irradiated fuel elements ahead. At the same time, the operation of six complete fuel assemblies based on Remix fuel will give us more information in terms of the behaviour of this fuel in the core, its effect on the physics of the reactor,” said Alexander Ugryumov, Vice President of TVEL for Scientific and Technical Activities and Quality. “We will be able to obtain the necessary data for licensing the full reloading of the core with Remix fuel, as well as the necessary reference experience for the commercialisation and wider implementation of this product.”

Remix fuel (regenerated mixture) is an innovative Russian development for light-water thermal reactors. Its fuel composition is made from a mixture of reprocessed uranium and plutonium, which is formed during the reprocessing of used fuel, with the addition of enriched uranium.

Unlike uranium-plutonium fuel for "fast" reactors (MNUP and mox), Remix fuel is characterised by a lower plutonium content. Its neutron spectrum does not differ from standard enriched uranium fuel, so the behaviour of the fuel in the reactor core and the amount of plutonium generated from uranium as a result of irradiation are generally identical. For nuclear power plant operators, this means that in the future, Remix fuel can be introduced without changes in the design of the reactor and additional safety measures. The use of such fuel will make it possible to expand the resource base of the nuclear power industry many times over by closing the nuclear fuel cycle, as well as to reuse the irradiated fuel instead of storing it.