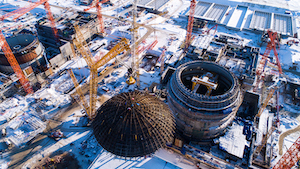 Installation of the dome of the inner containment shell (VZO) at unit 1 of the Kursk-II NPP the was completed on 27 December.

The final tier of the VZO was installed by specialists of Trest RosSEM, which is part of Rosatom’s Engineering Division (ASE). The inner containment is the most important device that ensures the radiation safety of a nuclear power plant.

“Installation of the last tier of the shell is a very demanding operation that requires high professionalism, since the mounted metal structure weighs 265 tons and requires high installation accuracy with tolerances of 10mm,” said Andrei Osharin, First Deputy Director for Construction of New Units at the Kursk NPP. “The diameter of the tier is 27 metres at the bottom. At the top, it tapers completely to form a sealed dome. The structure of the reactor building of the first unit has now reached a height of 61.7 metres.”

The installation of the tiers of the domed part of the inner containment was carried out by one of the most powerful crawler cranes in the world - Liebherr-11 350 with a lifting capacity of up to 1350 tons. The crane was specially delivered to the construction site for this work.

“The installation of the dome is a landmark event in the construction process of Kursk-II,” noted Oleg Shperle, Vice President of  Atomstroyexport, Project Director for the construction of Kursk-II. “Of fundamental importance for us was the completion of the installation of the inner containment shell in 2021, because the closure of the thermal circuit created comfortable conditions for working in the central hall of the reactor building in winter.”

The builders will start concreting the dome of the inner protective shell in March 2022. Construction of the inner containment shell for unit 1 took two years — the installation of its first tier was started in December 2019.

Also on 27 December, Izhorskiye Zavody, part of the OMZ Group, complted the manufacture of a pressure compensator for Kursk II-2 on an order from AEM-Technologies (part of Rosatom’s mechanical engineering division Atomenergomash). The equipment has successfully passed all hydraulic tests.

The pressure compensator operates in the primary circuit of the reactor. It serves to create and maintain pressure in the circuit at nominal operating modes of the installation, as well as to limit pressure fluctuations in transient and emergency modes. During hydraulic tests, the vessel was tested for tightness when exposed to high temperatures. The compensator is supplied with water heated to 96 degrees Celsius.

During the tests, the pressure in the tank reaches the maximum values permissible for this equipment - 24.7MPa. It passed all the tests and was accepted by the committee. The equipment is being prepared for shipment to the site. The pressure compensator has a mass of 185 tons. When assembled, it is almost 14 metres long and 3.3 metres in diameter. Its internal volume is 79 cubic metres  and the wall thickness is 152mm.

Kursk-II is a replacement station for the current Kursk nuclear plant. Commissioning of the first two units with the new design VVER-TOI reactors will be synchronised with the decommissioning of the RBMK reactors at Kursk 1&2 of the operating plant.  Kursk 1 of the existing plant was permanently closed down earlier in December.