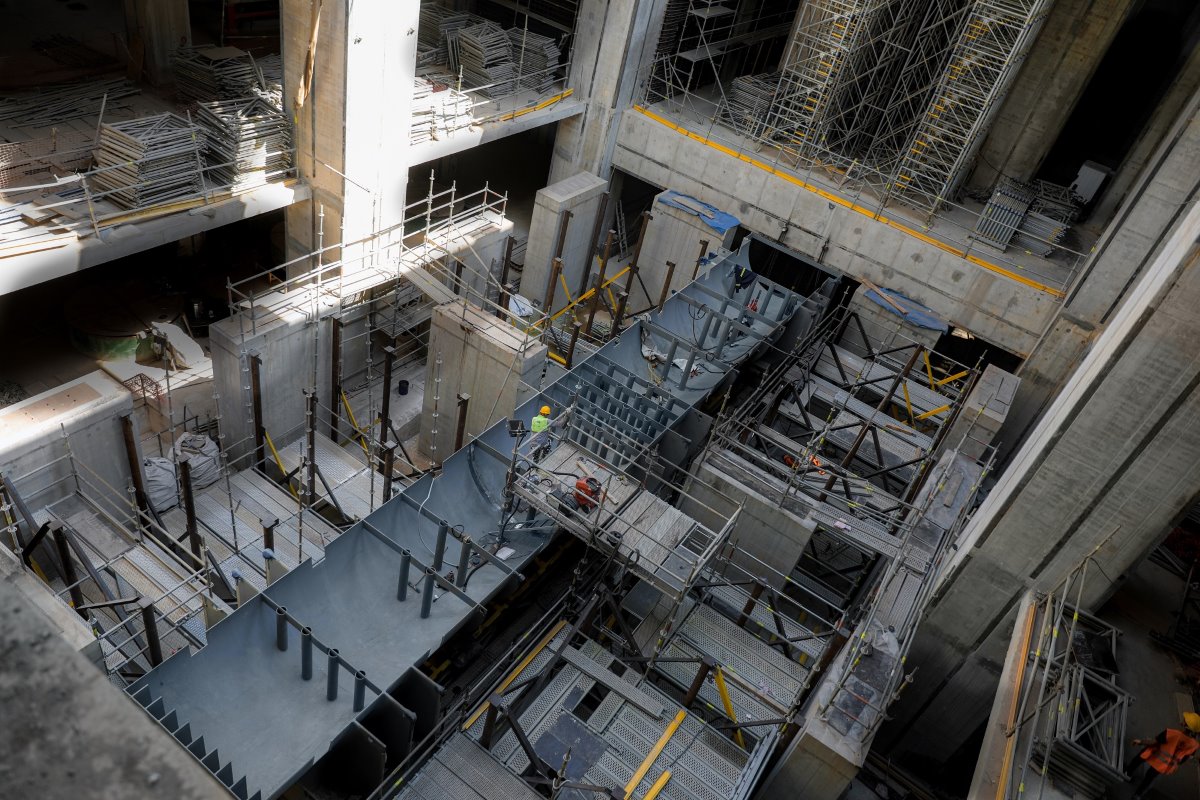 Despite the dispute between construction contractors at the Akkuyu NPP under construction in Turkey, work is continuing at the site. Installation of the turbine condenser for the turbine hall of unit 1 has now begun, project company Akkuyu Nukleer said on 17 August. The condenser consists of more than ten large components. One of them is the condensate drain line, which comprises four sections with a total weight of 42 tons and is designed to drain the exhaust steam condensate.

The condenser arrived at the site disassembled and the first stage of its assembly, which took 32 days, has been completed. This includes the installation and preparation for welding of the condensate discharge line. After assembly is completed, the length of the capacitor will be 25 metres, the width 16 metres, and the height 17 metres. The weight of the entire structure will be more than 1,000 tons. Welding of the section will take about 10 days, followed by the assembly of auxiliary structures for mounting the lower and middle sections. Installation of the turbine condenser is carried out by highly qualified personnel.

“This is an important and crucial stage in the construction of the turbine island, followed by the installation of the main equipment of the turbine generator set, said First Deputy General Director of Akkuyu Nukleer and Director of the NPP under construction Sergei Butskikh. “Construction work and installation of equipment at the site are carried out in shifts, around the clock and seven days a week - teams of professional builders, installers, welders and other specialists are working intensively and demonstrate well-coordinated teamwork.”

The turbine condenser was manufactured at Rosatom’s ZiO Podolsk engineering plant, which specialises in the production of highly sophisticated heat exchange equipment for enterprises of the fuel and energy complex: nuclear and thermal power plants, oil and gas industry, shipbuilding.

Concreting of the foundation for the installation of the turbine unit was completed in June. After the foundation had strengthened sufficiently, specialists assembled the embedded parts and is now installing the turbine condenser components ready for placement of the turbine. All stages of construction at the Akkuyu NPP site are closely monitored by independent inspection organisations and the national regulator, the Turkish Nuclear Regulatory Agency (NDK).

Also on 17 August, an award ceremony was held for the builders on the occasion of the Builder's Day - a professional holiday, which is traditionally celebrated in Russia on the second Sunday of August. The event was attended by representatives of all companies involved in the construction. In her welcoming speech to the representatives of Turkish companies participating in the project, Anastasia Zoteeva, General Director of Akkuyu Nukleer, thanked each builder for their work and professionalism.

“It is Turkish companies that perform an incomparably large amount of the work,” she said. “We are doing everything possible to ensure that the construction continues without interruption… The number of Turkish citizens and companies participating in the project will grow. We are not only building a nuclear power plant, we are creating the foundation for the development of many related industries in Turkey, and for further strengthening Russian-Turkish cooperation in science, technology, education and other areas. We are building the future for several generations of engineers and power engineers, for the inhabitants of the whole region and the entire Republic.”