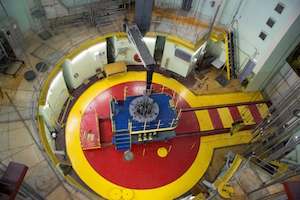 Testing was carried out at Rosatom’s Research Institute of Atomic Reactors in Dimitrovgrad.

Two experimental fuel assemblies with VVER and PWR fuel rods were manufactured at the Novosibirsk Chemical Concentrates Plant. Each ATF fuel assembly contains 24 fuel elements with four various combinations of cladding and fuel matrix materials. Fuel pellets were made of traditional uranium dioxide, as well as uranium-molybdenum alloy with increased density and thermal conductivity. Zirconium alloy with a chromium coating and chromium-nickel alloy were either used as the rod cladding material.

In Janaury 2019, the experimental ATF fuel assemblies with VVER and PWR fuel rods were loaded into the water loops with the relevant water-chemical modes of the MIR research reactor.

After the first irradiation cycle, both fuel assemblies were removed from the reactor. TVEL said that preliminary examination, performed on-site by a team from its Bochvar Institute for Inorganic Materials in Moscow, revealed neither changes in the fuel rods geometry, nor damage to the cladding surface.

Several fuel rods from each fuel assembly were extracted for further post-irradiation studies. The results from these examinations will help TVEL to determine and choose the optimal combination of materials. New non-irradiated samples were installed into the fuel assemblies for further irradiation testing in the MIR reactor.

"The Russian ATF project goes on as planned," said Alexander Ugryumov, vice president for research and development at TVEL. "In 2020, we are committed to expand the testing programme to irradiation in a commercial reactor. In particular, we plan to load a batch of fuel assemblies with several ATF fuel rods into one of Russian operational VVER-1000 reactors. Further on, we may consider testing of some other materials for fuel pellets and rod claddings" he added.

Accident tolerant fuel is designed to be resistant to severe beyond-design basis accidents, with the loss of coolant in the reactor. Even in case of heat removal failure in the core, ATF is supposed to keep its integrity for a long enough time without a zirconium-steam reaction inducing hydrogen release.  Its development is of critical importance for further elevating the integral safety and reliability of nuclear power, TVEL said.

Outside of Russia, ATF fuel designs are also under development in Europe, Japan, the USA. Framatome, Global Nuclear Fuel (GNF) and Westinghouse are working with the US Department of Energy (DOE) to commercialise ATF concepts by 2025. China General Nuclear (CGN) started irradiation testing of an ATF fuel design early this year.

Photo: MIR reactor where testing was carried out (Source: TVEL)