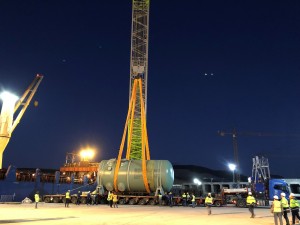 The Vostochny cargo terminal at the Akkuyu nuclear power plant under construction in Turkey has received another batch of materials and equipment including the reactor pressure vessel (RPV) for Akkuyu 2.

The shipment also included sections of the second tier of the unit 3 internal containment, pipes and other equipment and materials, project company Akkuyu Nuclear (part of Rosatom) said.

The RPV is a 11.45-metre-high cylindrical vessel with an elliptical bottom and weight 343.2 tons.

“Manufacturing and delivery of the main equipment for the Akkuyu NPP are strictly on schedule, according to Akkuyu Nuclear. RPV was transported almost 9000 kilometres from St Petersburg to Mersin province. Specialists from the Department of Logistics and Customs Clearance of Akkuyu Nuclear obtained permission from the Turkish Nuclear Regulatory Agency (NDK) and carried out customs clearance of the cargo."

The equipment was unloaded at the Vostochny cargo terminal, and then delivered and placed at a temporary storage site, where the reactor vessel will undergo an incoming inspection. The plan is to install equipment in the reactor compartment of Akkuyu unit 2 this year.

The manufacture of the Akkuyu 2 RPV began at Izhora Plants in March 2019 and underwent comprehensive testing during the manufacturing process, including hydrotesting, as well as control assembly with internals. Based on the test results, a special commission confirmed compliance with all design parameters and the high quality of the product. All main stages of equipment manufacturing were carried out under the direct supervision of inspectors from NDK. Currently, the Volgodonsk branch of AEM-Technologies Atommash (part of Rosatom’s mechanical engineering division Atomenergomash) is manufacturing the reactor vessel for Akkuyu unit 3.

Meanwhile, Russia’s RASU JSC on 1 February received approval from NDK for the manufacture of an electrical equipment monitoring and control system (ECS EC EB) for Akkuyu 1&2.

The reactor pressure vessel for Akkuyu 2 has arrived on site (Photo: Akkuyu Nuclear)