Progress at Turkey's Akkuyu nuclear plant as SGs are delivered 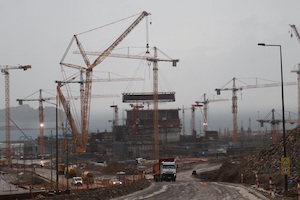 Rosatom has installed the fifth tier of the internal containment (VZO) at unit 1 of the Akkuyu nuclear power plant under construction in Turkey, Akkuyu Nuclear said on 17 January. Steam generators have also been delivered for Akkuyu 2.

The VZO is a key elements of the safety system, which provides protection for the reactor compartment and is a support for pipeline penetrations and a polar crane that services the operation of the nuclear reactor. It is formed from steel cladding, which ensures the tightness of the reactor compartment, and special concrete. The fifth tier of the VZO is a welded metal structure consisting of 12 sections. At the beginning, sections weighing 10.75 tons and 6.45 metres high were welded together on a special platform and assembled into a single ring with a total weight of 129 tons and a diameter of 44 metres at the wide (lower) part. And then, with the help of a heavy crane, the finished ring was lifted and installed in the design position.

Sergey Butskikh, first deputy general director of Akkuyu Nuclear and director of nuclear plant construction, said the main difficulty with the installation is that the fifth tier is a transitional element between the cylindrical and domed parts of the shell. “On the eve of the operation, careful preparation was carried out taking into account a large number of conditions and parameters: the mass of the load, the distance over which the load will be moved, the sling attachment scheme, the weather conditions on the day of installation, and many other factors. The technical operation was successful, and the load was moved to the installation site with an accuracy of one millimetre. At the next stage, the builders will have to mount 60 consoles that will serve as a support for the rail track of the polar crane. This is an important structural element of the reactor building; they will bear the main loads from large-sized equipment and cargo lifted by the crane.”

Following installation of the fifth tier using a Liebherr LR 13000 heavy crawler crane, the height of the reactor building increased by almost 6.5 metres to 43.1 metres. Installation took about 12 hours.

In parallel with the construction of the internal containment, work is underway to build external and internal walls, and installation of embedded parts for transport, pedestrian and backup locks is underway. In the turbine building at the level of 8.4m, the floors of the first floor are being constructed, walls and columns are being erected.

The reactor buildings at Akkuyu have double containment. The outer containment is formed from reinforced concrete and is designed to withstand any extreme external impact - earthquakes up to magnitude 9, tsunamis, hurricanes, as well as any combinations of these.

Also on 17 January, four steam generators for unit 2 were delivered to the site. After they arrived by ship at the Vostochny Marine Terminal, they were unloaded by a heavy crawler crane and transported to the temporary equipment storage at Akkuyu, where a special commission will carry out incoming inspection and quality control.

The steam generators from the Russian manufacturer Atommash were delivered by road to the port on the shore of the Tsimlyansk reservoir, where they were loaded onto a cargo ship. From Volgodonsk, the ship sailed along the Don River to the Sea of ??Azov, passed through the Black, Marmara, Aegean and Mediterranean Seas, and finally arrived at its destination. The length of the sea route was about 3000km, the total weight of the cargo consignment exceeded 1800 tons.

“Transportation of large-sized equipment for the Akkuyu NPP is usually carried out in a combined way – both by land and by water,” explained Butskikh. “The carrier takes into account many features, carefully considers the route of the cargo, controls each stage of loading. For example, additional dredging was organised to transport this batch of steam generators at the berth at the Tsimlyansk reservoir."

Butskikh added that preparations to install the steam generators at Akkuyu 1 are already being completed. Once they have been installed welding of the main circulation pipeline can begin, connecting the main equipment of the primary circuit.

Steam generators have a long manufacturing cycle — the total duration of all production operations from the beginning of the production of metallurgical blanks to shipment takes about two years. The production cycle includes welding of the hull from individual elements, manufacturing of bottoms, drilling of primary circuit headers, manufacturing and installation of heat exchange tubes, internals, as well as a set of control measures. Before shipment from the manufacturer, steam generators must undergo hydraulic and vacuum tests: all technological openings are closed with special plugs, and nitrogen is introduced under pressure. This confirms the reliability and durability of the equipment.

In 2010, Turkey and Russia signed an intergovernmental agreement on cooperation in the construction and operation the Akkuyu nuclear plant in Mersin province. Rosatom is building four VVER-1200 reactors at the site, under a build-own-operate model. Construction of the first unit began in 2018, with start-up planned for 2023. The 4800MWe plant when completed is expected to meet about 10% of Turkey's electricity needs.