Orano to transfer used fuel to storage at Diablo Canyon 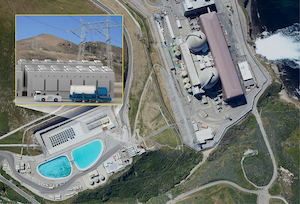 Using Orano’s EOS NUHOMS dry storage system with its advanced capabilities and horizontal orientation, the offload of used nuclear fuel from both plant units is scheduled to be completed in approximately two years after the reactor shutdowns. Implementing Orano’s dry storage system Diablo Canyon does not require any major modifications to the existing storage pad or transfer path, and the technology will meet the site’s geologic and environmental conditions.

The two 1100MWe pressurised water reactors (PWRs) at Diablo Canyon began operation in 1985 and 1986, and produce 9% of the state's electricity. In 2018 PG&E announced the units would close when their operating licences expire.

Photo: Orano has been contracted to transfer used fuel to storage at Diablo Canyon nuclear plant in California (Photo: Orano)