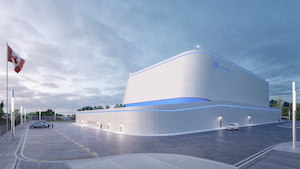 Ontario Power Generation (OPG) said on 2 December that it will work together with GE Hitachi Nuclear Energy to deploy a small modular reactor (SMR) at the Darlington new nuclear site. The GE Hitachi BWRX-300 was one of three SMR designs that were under consideration for deployment at Darlington. The others were Terrestrial Energy's Integrated Molten Salt Reactor and X-energy's Xe-100 high-temperature gas-cooled reactor.

OPG, announcing the selection of the BWRX-300 in a live stream, said it will now work with GE Hitachi on the SMR engineering, design, planning, preparing the licensing and permitting materials, and performing site preparation activities. The companies are targeting a “mutual goal of constructing Canada’s first commercial, grid-scale SMR, projected to be completed as early as 2028.”

The Darlington New Nuclear Project is the only site in Canada with an approved Environmental Assessment and regulatory licence for new nuclear. It is adjacent to the existing Darlington NPP, with four Candu reactors and was originally intended as an extension of the plant.  OPG was granted a site preparation licence by the Canadian Nuclear Safety Commission (CNSC) in 2012, after completion of an environmental assessment. However, reductions in forecast electricity demand led to a decision to defer plans for new build. OPG last year announced it was resuming planning activities for additional nuclear power generation for an SMR at the site.

In October, OPG said the CNSC had decided to renew for 10 years the existing Site Preparation Licence for the project, which had been due to expire in August 2022. This will allow OPG to undertake preliminary work at the site such as excavation and grading, installation of services and utilities for future buildings, and construction of service buildings.

Site preparation, which will include “installation of the necessary construction services,” will begin in the spring of 2022, pending necessary approvals. OPG additionally said it will apply to the Canadian Nuclear Safety Commission (CNSC) for a Licence to Construct the SMR by the end of 2022. According to OPG’s indicative schedule, CNSC is expected to issue a licence to build by 2024, and a licence to operate by 2027.

OPG in October 2020 had initiated advanced engineering and design work for that project by choosing three SMR developers: GEH, Terrestrial Energy, and X-energy. The BWRX-300 is the 10th evolution of GE’s BWR technology, which GEH says represents “the simplest, yet most innovative BWR design since GE began developing nuclear reactors in 1955”.  GEH also notes that the design is based on the Gen III+ 1,520MWe ESBWR, which the NRC certified in 2014. It is currently undergoing a Canadian Nuclear Safety Commission pre-licensing Vendor Design Review.

“We are thrilled to be selected by OPG as a technology partner,” said GEH president and CEO Jay Wileman. “OPG is Ontario’s climate change leader and is positioned to become a world leader in SMRs. Together, this partnership will bring jobs and economic benefits to Durham Region, Ontario and Canada, and potential global export of this technology.”

A 2020 study undertaken by the Conference Board of Canada shows strong economic benefit to Ontario from construction and 60 years of operation of a single SMR facility in the province.  Beyond that, construction of a new nuclear generator at Darlington is expected to drive employment and economic growth, thanks to the strong existing Ontario- and Canada-based nuclear supply chain. It is anticipated that 70-80%t, or more, of the necessary components and materials for the SMR will be sourced in Ontario.

Ontario, New Brunswick, Saskatchewan and Alberta earlier signed a Memorandum of Understanding to collaborate on the advancement of SMRs as a clean energy option to address climate change and regional energy demands, while supporting economic growth and innovation. OPG said Saskatchewan is also looking to follow Ontario and build SMRs to replace its coal fleet, building up to four SMRs with the first unit in Saskatchewan being in service in the early 2030s. Other countries, including the UK, the USA, France, Poland and Estonia have all expressed interest in building SMRs, and Ontario would be well placed to contribute to the Canadian and international supply chain.

“We know nuclear is a key proven zero emissions baseload energy source that will help us achieve net zero as a company by 2040, and act as a catalyst for efficient economy-wide decarbonization by 2050,” said Ken Hartwick, OPG’s President and CEO. “By moving forward, with our industry-leading technology partner GE Hitachi, on deployment of innovative technology for an SMR at Darlington, OPG is paving the way on the development and deployment.