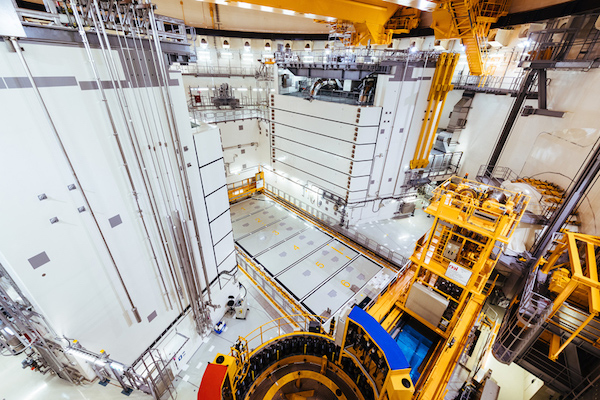 The first criticality of the EPR reactor installed at unit 3 of the Olkiluoto nuclear power plant in Finland was achieved on 21 December, power utility Teollisuuden Voima Oyj (TVO) announced.

TVO said a new nuclear power plant was last commissioned in Finland more than four decades ago. OL3 will generate about 14%  of Finland's electricity after the start of regular electricity generation.

“This moment will be remembered forever as a sign of the hard work to put our new plant unit into operation. It speaks of the strong professionalism in the nuclear industry and the desire to make Finland's largest climate work a reality,” said Marjo Mustonen, TVO Production Director. OL3 project manager Jouni Silvennoinen said OL3 will be connected to the national electricity grid in January 2022.

The Radiation and Nuclear Safety Authority in Finland (STUK -Säteilyturvakeskuksen) on 16 December granted TVO permission for first criticality and low power tests. According to STUK, commissioning tests conducted at the plant unit demonstrated that the unit was operating as planned, and the preconditions for its start-up and conducting low power tests had been fulfilled.

In the permit, STUK stated that the commissioning tests also included retesting after modifications. Initial hot functional tests - carried out without nuclear fuel in the reactor - were completed in 2018. These tests were delayed due to vibrations in the pressuriser surge line. As a result of the test results, TVO said a comprehensive modification package would be implemented to update the plant's electrical and instrumentation and control systems. TVO said at the time that the final automation modification package would be implemented and the pressuriser surge line vibrations repaired by modifying the pipe support and that, after modifications, the necessary commissioning tests would be repeated.

TVO investigated the exceptional events that occurred during the trial operation and conducted investigations into the most significant events. STUK monitored the progress of the test runs, clarified the problems and checked the most significant modification plans, as well as performed the necessary inspections at the repaired and modified sites. During the recent heat tests, TVO was able to ensure, for example, that the oscillation of the pressuriser connection line that had caused  problems had been reduced sufficiently with the help of dampers added to the connection line.

The Areva-Siemens consortium is constructing the OL3 plant under a fixed-price turnkey contract. They have joint liability for the contractual obligations until the end of the guarantee period of the unit. Construction of Olkiluoto 3 began in 2005 and completion of the reactor was originally scheduled for 2009. However, the project faced a series of delays and setbacks. The project to build OL3 is some ten years behind schedule and significantly over budget. STUK project manager Essi Vanhanen   said construction of the plant has been a learning place for everyone involved.

“We commend the TVO teams for this significant milestone and we thank the Framatome and Areva project teams that persevered to reach it. This milestone paves the way for safe, reliable, low-carbon electricity generation to the residents of Finland,” said Bernard Fontana, CEO of Framatome. “From the fuel manufactured in our plants to the long-term operational and outage services that Framatome will supply to OL3 in the future, we are honored to support this unit in reaching its full potential.”