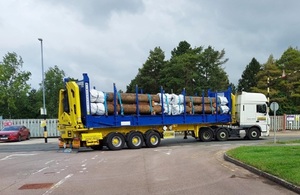 Technology commonly used in the oil and gas industry has been adapted for use in the nuclear industry for Magnox Harwell, resulting in millions of pounds in savings for the taxpayer, LLW Repository Ltd (LLWR) has reported.

A treatment process involving use of ultra high pressure water jetting to clean 1.2 tonne sections of pipework contaminated with low levels of radioactive scale, has been provided by LLWR through its Metallic Waste Treatment Service, and Augean’s Port Clarence Facility.

Harwell excavated around 1600 pipeline sections from its Offsite Discharge Pipeline (ODP) that previously carried aqueous waste along an underground route for around 9km to an authorised discharge point and placed them into storage pending treatment and disposal.

Carly Sutton, Waste Management Services Consultant and Magnox Relationship Manager at LLWR, said: “By adapting a proven technology and applying it to the treatment of this pipework, the amount of waste that would otherwise need to be consigned to the LLW Repository has been drastically reduced and only small volumes of secondary waste will need processing for onward treatment and disposal. The clean pipe sections are suitable for recycling back into the metal market providing multi million pound savings to the UK taxpayer.”

The approach is driven by the requirements of the Waste Hierarchy and meeting Best Available Techniques (BAT). In addition, a bespoke transport system was developed for the pipework which has significantly reduced the number of transports required by increasing the number of sections that can be sent at any one time from Harwell to Port Clarence, at Stockton on Tees, reducing the potential carbon footprint. All ODP sections are expected to have been treated and recycled by the end of March 2022.

Harwell, located on a 102 hectare site in Oxfordshire was established in 1946 as the UK’s first Atomic Energy Research Establishment. There were 14 experimental reactors on the site over its lifetime, with just three remaining to be decommissioned. On closure, the site accommodated five research reactors of various types as well as a number of other nuclear research facilities, together with plutonium handling facilities, radioactive laboratories, nuclear waste treatment and storage facilities.

In 1990, major nuclear research projects finish at Harwell and activities diversified into many new areas, materials technology, non-destructive testing, and electronics to name but a few. Spin off technologies benefited a wide range of industries, such as the offshore oil and gas industries, medical, computer programming and chemical engineering.