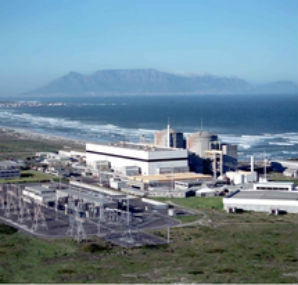 Koeberg's two 900MWe reactors produce about 32t of used fuel a year and additional storage will be needed after 2018.

Holtec International is to supply HI-STAR 100 dual-purpose used fuel storage and transportation cask for use at the Koeberg plant. Under a contract signed with Eskom in May, Holtec will also design and supply the necessary handling equipment and provide licensing support, training, and cask loading services.

Koeberg's two units are each designed to store some 1536 used fuel assemblies. Currently unit 1 had used about 73% and unit 2 about 70% of the storage space, and the rate at which they were being filled has increased as a result of a new fuel management strategy that requires more used fuel assemblies to be stored after each refuelling outage than before. In order to maximise storage capacity, Eskom has adopted a three phases strategy up until 2025.

The first phase will see the procurement of seven casks that will allow Koeberg to continue operating beyond a three-year cut off date without having filled the pools, by removing about 200 fuel assemblies. "These new casks will be stored alongside the existing four metal casks in the onsite cask storage building. The existing casks store 112 fuel assemblies," Eskon said.

Low and intermediate-level radioactive waste is transported by road hundreds of kilometres away to the Vaalputs repository, which Eskom favours as the central interim storage facility. South Africa is considering a range of final storage options, including recycling high-level waste or storing it deep underground to service its ambitious plans to generate an additional 9600MWe by 2030.