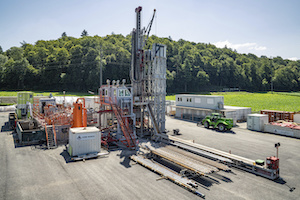 Switzerland’s National Cooperative for Disposal of Radioactive Waste, Nagra, announced that it had successfully completed its deep drilling campaign. The deep repository project is now approaching an important milestone: the site proposal.

Nagra has drilled down eight times in the last three years, with its final, ninth well is about to be completed.

With this, Nagra examined the three potential siting regions of Jura Ost, Nördlich Lägern and Zürich Nordost. The repository for Switzerland's radioactive waste is to be built in one of these three regions.

"The drilling has confirmed that all three regions are suitable for a repository," said Nagra CEO Matthias Braun. It still has to be decided which one is best suited for the facility.

According to Braun, Nagra is very satisfied with the course of the drilling campaign. Good rock samples, so-called drill cores, could be brought to the surface everywhere. The numerous measurements in the boreholes also delivered good results.

Nagra is now slowly moving from the research phase to the approval and implementation phase. “The database that we have developed over the past few years is very solid. We will be ready for our location proposal in the autumn,” said Braun.

The Federal Council and Parliament have the last word in the search for a location, which is conducted by the federal government – and, if a referendum is held, the Swiss electorate.

The costs of the drilling campaign were CHF170 million ($183m) and the costs of all underground investigations in northern Switzerland since the beginning of 2019, CHF240 million.