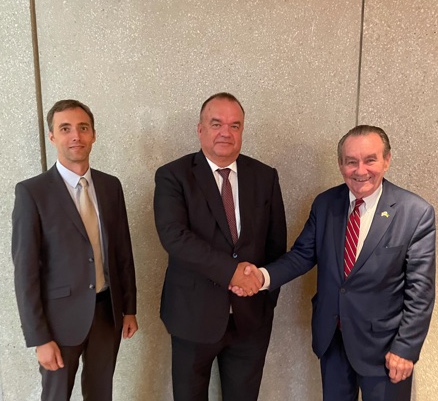 Memoranda of understanding have been signed between US companies, including Westinghouse and NuScale Power, after a Ukrainian delegation visited the United States in early September.

US-based NuScale Power and Ukrainian nuclear utility Energoatom on 1 September signed a Memorandum of Understanding (MOU) to explore the deployment of NuScale Power plants in Ukraine during the visit of a high-level Ukrainian delegation to the USA.

Under the MOU, NuScale will support Energoatom’s examination of NuScale’s SMR technology, including a feasibility study for proposed project sites, the development of a project timeline and deliverables, cost studies, technical reviews, licensing and permitting activities, and project specific engineering studies and design work.

“NuScale is excited to partner with Energoatom on the potential deployment of a NuScale Power plant in Ukraine,” said John Hopkins, Chairman and CEO of NuScale Power. “As demonstrated by recent announcements, NuScale is continuing to gain impressive momentum in international interest around the globe. We look forward to demonstrating the immense benefits of our technology to Energoatom and to the people of Ukraine as they seek to decarbonize their energy sector.”

Energoatom Acting President Petro Kotin said Energoatom “is pleased to establish a cooperation with NuScale Power, a US vendor of small modular reactors. Today, NuScale’s SMR technology is the only technology licensed by the world's most well-regarded and leading regulator. We are considering the possibility of building SMRs in Ukraine to replace carbon-emitting thermal power plants and to increase the load following capacities of the Ukrainian energy system”.

The Minister of Energy of Ukraine Herman Galushchenko welcomed the signing of the document and noted: “This is further evidence that cooperation in the energy sector is one of the key priorities of the strategic partnership between Ukraine and the United States. We are talking about the prospects for the development of nuclear energy in Ukraine over the next half century."

According to Interfax, citing the Telegram channel of Ukrainian MP Oleksiy Goncharenko, the Ukrainian delegation, led by President Volodymyr Zelensky, presented the US with a $277 billion plan for the transformation of Ukraine including a project for the development of nuclear energy worth $9.6 billion. Interfax-Ukraine said a government source confirmed that the list of projects had been prepared on the eve of the visit. However, according to him, "some changes could have been made to it directly in the United States”.

The project for the development of nuclear energy to 2035 provides for the supply of equipment and technologies and nuclear fuel to Ukrainian NPPs, which, “along with profit from investments, should be of interest to the United States”, Interfax said.  It also includes a project for the extraction of uranium ores and the production of nuclear fuel in Ukraine worth $1.2 billion. This provides for the construction of a mine for the extraction of uranium ores and a plant for the production of nuclear fuel (fuel elements) based at the Skhidny Mining and Processing Plant. The project is expected to be implemented in the period from 2022 to 2026.

After President Zelensky met with representatives of the US business community on 1 September, Energoatom CEO Kotin met with the founder and President of Holtec International Kris Singh. Discussions concerned implementation of joint projects, in particular the commissioning of the Centralised Spent Fuel Storage Facility in Ukraine, as well as prospects for future cooperation. Kotin also met representatives of the US Department of Energy.

On 3 September, Kotin took part in a meeting between the Ukrainian Energy Minister Galushchenko and US Deputy Minister of Energy Andrew Light. During the meeting, the Ukrainian delegation provided information on the current state of affairs in the energy sector of Ukraine and outlined plans for the transformation of the energy sector along with ways to develop low-carbon energy. Energoatom said the parties discussed Strategic Dialogue activities, key investment projects and promising areas of bilateral cooperation, including construction of new NPP units and production of commercial hydrogen, and agreed on technical assistance for decarbonisation measures in Ukraine, emphasising the important role of nuclear energy in this context.

"The general atmosphere of the meetings and the agreements reached allow me to say with confidence that Ukraine really has the support of the United States to strengthen its energy security and independence. It is very important that both the Ukrainian and American sides are aimed at achieving a concrete result. This approach - we can do it - is the key to success,” said Galushchenko.

Also on 3 September, Kotin met with the President of the American-Ukrainian Business Council, Morgan Williams. The Councils 200 members include such companies as Westinghouse and Holtec. During the meeting, Kotin spoke about Energoatom’s plans to build new large and small capacity NPPs in the context of recently signed memoranda of understanding with Westinghouse Electric and NuScale Power. The parties agreed to continue the dialogue to find possible areas of cooperation and ways to attract investment  in Energoatom’s projects.

The following day, Kotin visited Westinghouse Electric's warehouses in South Carolina, where equipment for the company's nuclear reactors is stored. The equipment and components are intended for the construction of a new unit at the Khmelnitsky NPP (KhNPP) using American AP1000 technology based on 31 August memorandum signed beyween Energoatom and Westinghouse.

At the warehouse, Kotin was accompanied by Westinghouse executives David Durham, President of Energy Systems, and Elias Gideon, Senior Vice President of Trade. "We inspected the main equipment of the AP1000 reactor unit, which has already been manufactured, is stored in the Westinghouse warehouse and is ready for shipment, said Kotin. “We certified that the storage conditions are satisfactory and the products are in excellent condition. The most critical equipment is stored under a nitrogen cushion. The complete kit for thevreactor island is available. It is very important that, in this way, we will be able to significantly reduce the construction time of the KhNPP power unit, as we will not have to spend time on the production of this equipment." He added that Durham and Gideon will visit Kiev shortly to continue discussions.

Photo: Petro Kotin had a conversation with Morgan Williams, the President of the U.S. – Ukraine Business Council (Credit: Energoatom)