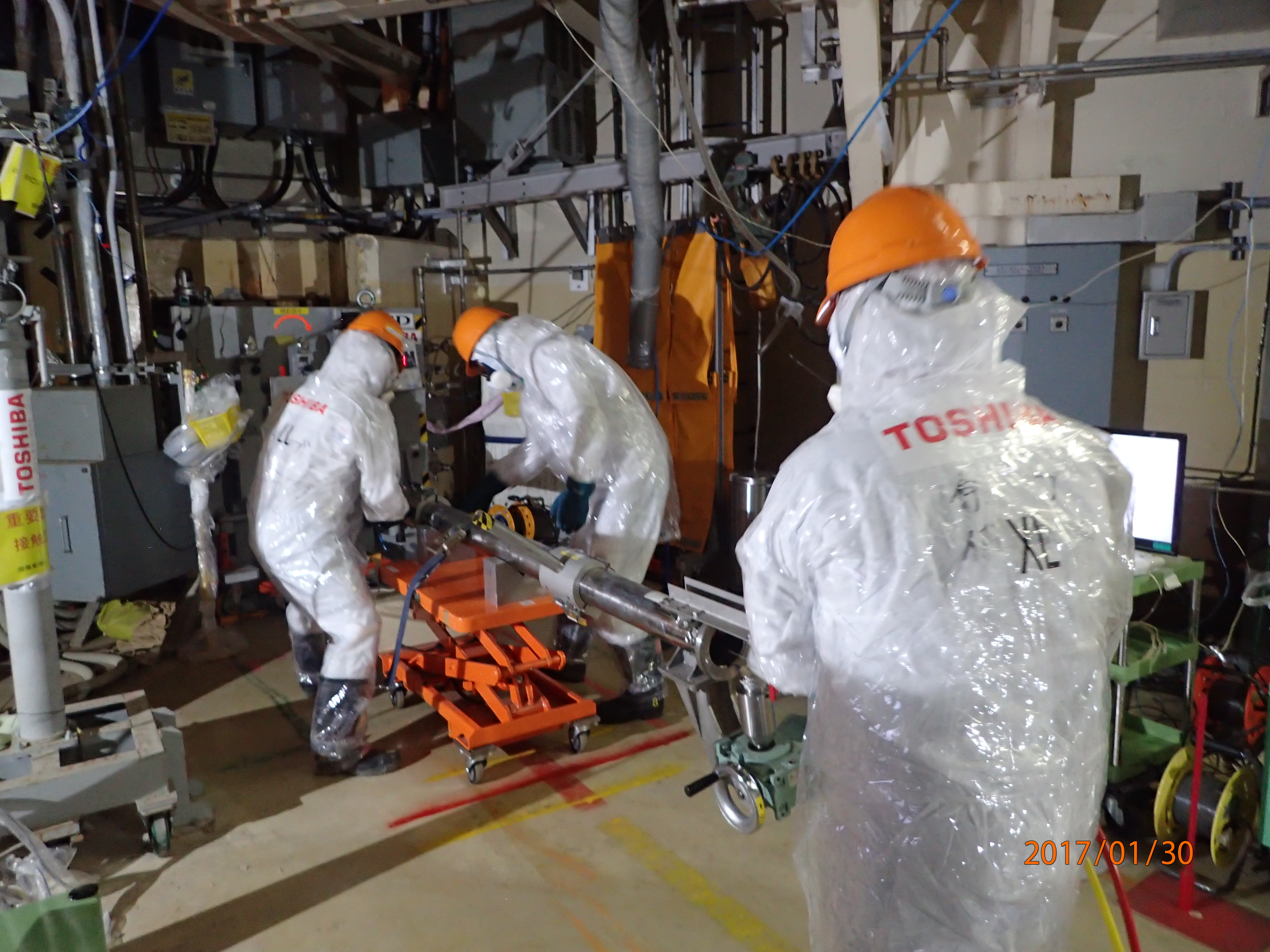 Tokyo Electric Power Company (Tepco) said on 16 February that an attempt to take a close look inside the reactor of unit 2 at the Fukushima Daiichi NPP using a scorpion-shaped robot had failed because of a technical flaw.

The robot was sent in to locate and examine the highly radioactive residue of melted nuclear fuel. However, Tepco told  a press conference, "We have received great hints for the next step." The robot sent data showing that 3m from the entrance to the pressure vessel, the radiation level in the air was 210 Sieverts per hour (Sv/hr) and the temperature was 16.5C.

A January preparatory survey of the area directly below the pressure vessel – known as the pedestal – using a remotely operated camera on a telescopic probe, led to estimates of extraordinarily high radiation level, estimated as high as 650Sv/hr  near the reactor core. Photos taken during that investigation showed a black mass and deposits near a grating in the pedestal area, possibly melted nuclear fuel.

The scorpion robot was intended obtain precise radiation readings, images of the reactor and other details needed to remove the debris. However it was unable to climb over obstacles and Tepco eventually gave up trying to retrieve it and cut its remote control cables. Tepco said it is uncertain whether high radiation caused a track glitch of the robot, which was co-developed by Toshiba Corp and the International Research Institute for Nuclear Decommissioning.

According to Tepco, the robot became unable to move when it encountered debris on the control rod drive (CRD) rail within the containment vessel it was meant to travel along towards the pedestal area. It was hoped that the robot would get to the end of the rail and continue to a metal grating directly underneath the pressure vessel, where a black mass had been found in the previous survey. The mass is believed to be nuclear debris. The company had also found on the grating a 1-square-metre hole believed to have been created by melted fuel.

The investigation faced many difficulties, with little clear surface for the robot probe and high radiation that was feared would cause problems with the robot's electrical components, as happened in preparatory surveys. A cleaning robot sent in three days earlier to clear a path for the scorpion had failed for this reason after high radiation damaged one of its cameras.

Tepco has spent most of the time since the 2011 disaster containing radiation and tryng to limit ground water contamination, and scientists do not have the information they need to begin decommissioning the reactors.  The clean-up is expected to take 40 years and to cost JPY8,000bn ($70.6bn).  “The roadmap for removing the fuel is going to be long, 2020 and beyond,” Jacopo Buongiorno, a professor of nuclear science and engineering at the Massachusetts Institute of Technology, told Bloomberg. “The re-solidified fuel is likely stuck to the vessel wall and vessel internal structures. So the debris have to be cut, scooped, put into a sealed and shielded container and then extracted from the containment vessel. All done by robots.”

Hitachi Corp plans to send a robot into the reactor core of Fukushima Daiichi 1 in April to  transmit photos of the fuel and measure radiation levels. The robot will lower a camera on a wire from a grate platform in the reactor to take photos and generate 3D models of the bottom of the containment vessel. While Hitachi hopes this robot will find some of the fuel, it is unlikely to be able to find all of it, according to Satoshi Okada, a Hitachi engineer working on the project. The company is already planning the next robot voyage for after April.

At unit 3, Tepco has so far focused on removing used fuel in the upper part of the reactor building, which Toshiba aims to extract with a claw-like system. This fuel did not melt and is still in a pool that controls its temperature. Toshiba is developing another robot to search for the melted fuel at the unit which is planned to enter sometime before March 2018.