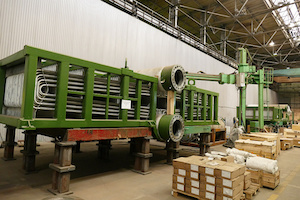 Russia’s Uralkhimmash (Sverdlovsk region, part of the OMZ group) has manufactured six PHRS heat exchangers for the Kudankulam NPP under construction in India.

The PHRS, is part of a passive safety system designed to remove residual heat and cool down the reactor during design basis initiating events and accidents, the report notes.

The heat exchangers have passed a comprehensive quality check by the customer - the Indian Atomic Energy Corporation. The equipment will be installed at unit 4 of the Kudankulam NPP.

"The production of these heat exchangers is a new type of product for Uralkhimmash. For this contract, we worked out bottlenecks - we sorted out all the controversial and complex issues that arose in the process of the work," said Uralkhimmash project manager Anastasia Charyeva.

The first two heat exchangers were sent by road to the port of St Petersburg, where they will be reloaded and transported by sea to their final destination. Now the company is preparing the next four sets of equipment for shipment.

Previously, the company had manufactured other equipment for the Indian nuclear power plant. Within the framework of the contract, 24 units of storage equipment for safety systems were produced: eight hydraulic tanks for the emergency core cooling system (ECCS) and 16 hydraulic tanks for the passive core flood system (SPZAZ). Also a separate subdivision of Uralkhimmash in Glazov completed an order for the production of 48 filters of various designs and six air collectors between 2017 and 2020.

Earlier, on 15 November, Izhorskiye Zavody, also part of the OMZ Group, said it had shipped a transport lock for unit 5 of the Kudankulam NPP. The equipment was manufactured by order of Rosatom’s Atomstroyexport. The transport lock serves as a barrier between the reactor hall and the outside environment. It is a chamber hermetically sealed on both sides through which nuclear fuel and equipment are transported during the construction and operation of a nuclear power plant.

In the event of an accident at the station, the gates of the transport lock should close on both sides in 9 minutes 20 seconds, while ensuring the tightness of the reactor compartment. When assembled, the lock weighs 280 tons, its length is 14 metres, and the diameter of the central section is 9 metres.The equipment was tested and accepted in June 2021 by a commission, which included specialists from Izhorskiye Zavody, representatives of the designer and the customer.

The gateway will go to India by sea in a disassembled and securely packed form to avoid exposure to high humidity and other adverse environments. To transport this oversized product to the berth, special hydraulic modular platforms were used. The length of the platforms with the tractor is 25 and 40 metres, and the carrying capacity reaches 250 tons. The transport now begins a 17,000 kilometre journey to its destination.