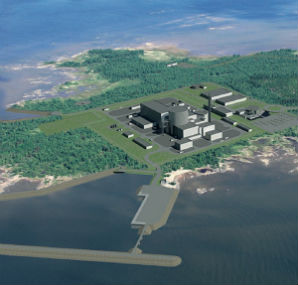 Russia’s Titan-2 Group, the main contractor for the Hanhikivi-1 nuclear plant being built by Russian state nuclear corporation Rosatom near Pyhäjoki, on 10 March signed new subcontracts for the construction of external spillway hydraulic structures and for the provision of electricity to the site.

The Estonian branch of Latvian hydrotechnic and civil construction company BMGS has been contracted to undertake construction and installation work relating to the Sea Canal, the construction of a temporary dam, and excavation for the spillway, and dam tailrace channels. Work will be completed in spring 2018.

The Finnish branch of JSC  Sosnovoborelektromontazh will undertake installation of 20kV transformer substations, installation of 20kV power supply networks, fibre optic networks and the construction of electric lighting on the main floor of the plant.  This work will also  be completed in early 2018.

Hanhikivi 1 will comprise a AES-2006 VVER-1200 reactor, which is scheduled to begin producing electricity in 2024. Rusatom Overseas, a subsidiary of Rosatom, and Finnish group Fennovoima signed a contract in 2013 for the construction of the reactor. Hanhikivi 1 is the largest-ever Russian investment project in Finland, and has an estimated cost of between €6.5-7bn ($6.9-7.5bn). A 34% stake in plant owner Fennovoima is held by RAOS Voima Oy, the Finnish subsidiary set up in 2014 by Russian state nuclear corporation Rosatom for the purpose of buying a share in the company.

Fennovoima is awaiting a construction licence, which was applied for in 2015 and is expected in 2018. Fennovoima submitted the first batch of detailed documentation to Finnish Radiation and Nuclear Safety Authority (STUK) related to the construction licence application in October 2016. Unit 2 of Russia’s Leningrad-II NPP is the reference plant for Hanhikivi but will involve some design changes to comply with STUK’s safety requirements. Fennovoima has decided on routes for the power lines connecting the plant to the national grid, including 110kV and 400kV power lines at the Hanhela and Valkeus substations. More detailed design of the power line routes is underway with construction scheduled for 2019-2023.

Fennovoima's environmental impact assessment (EIA) programme for its own facility for the disposal of used nuclear fuel was submitted to the Environment Ministry in June 2016.  However, the Ministry is urging Fennovoima to continue cooperation with the licensees of the Onkalo repository project at Olkiluoto. It considers the most desirable solution is for Fennovoima's used fuel to be placed in Posiva's repository in Olkiluoto, construction of which is expected to start soon.