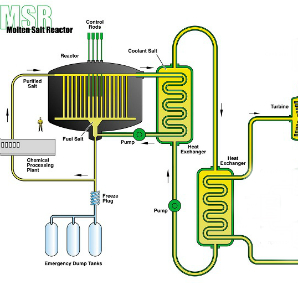 On 6 June, UK researchers Jasper Tomlinson and Trevor Griffiths won £75,000 in Technology Strategy Board funding (including £20,000 of contributions-in-kind) to carry out an eight-month feasibility study.

The project, which will be managed by mechanical engineer Rory O'Sullivan, aims to develop a ranking of alternatives and configurations of a liquid-fuelled molten-salt reactor, including costs, regulatory, public acceptance and site issues for building and licensing a pilot-scale demonstration reactor in the UK. It would aim to prepare the ground for a full engineering design for the chosen option, to present to potential investors.

"There isn't an MSR currently operating anywhere. If people could look at one, their conception of nuclear power would entirely alter. They are nothing like the present PWR setup. They are so extraordinarily different. That is what we are trying to do," says Jasper Tomlinson, whose small business Energy Process Developments will be carrying out the work starting in September at the earliest, subject to signing a contract.

On 19 May Atkins nuclear technical director, Paul Littler, and consultant Barry Snelson gave a lecture in Warrington entitled, 'Fission's future: Molten Salt Reactors - can they be the answer?'

In the talk, Littler said that there are some 18 different varieties of MSR. All use fuel in molten form; the salt consists of a chemical solution mixture of actinides, thorium, plutonium and uranium as halides. Temperatures are up to 800°C, so significantly hotter than LWRs, but because salts' boiling points are almost double that (1400°C) a pressurised primary system is not required.

According to the Weinberg foundation, MSRs have several benefits over current LWRs: molten fuel allows 30 times greater burnup than solid fuel, eliminates the risk of LOCAs since the coolant is also the fuel, and the molten salt fuel is not chemically reactive, so the fuel simply solidifies if it leaks out.

Littler of Atkins said that the reactor also allows the breeding of uranium from fertile thorium, which is three times more abundant than uranium in the earth, and in terms of fuel-grade deposits is perhaps 100 times more abundant.

Littler said that MSRs could fill the gap between the end of the current generation of nuclear reactors and the development of commercial fusion power, and start up about 2050.

The lecture is available to watch online:
http://www.atkinsglobal.com/en-GB/media-centre/events/atkins-lectures/2014/molten-salt-reactors-can-they-be-the-answer