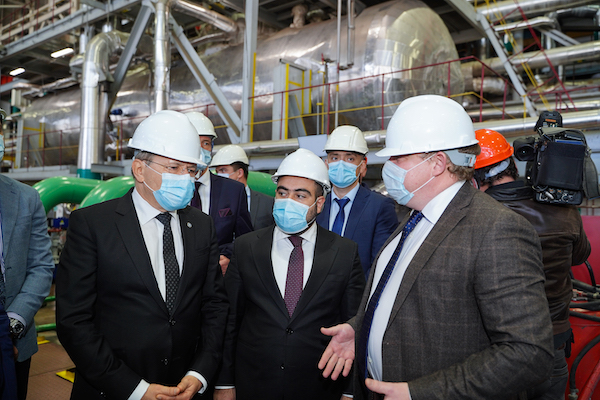 Upgrading of unit 2 at the Armenian NPP was completed on 16 November. The life of the station was extended until 2026 with the assistance of Rosatom, increasing the level of its safety and efficiency.

The occasion was attended by Rosatom General Director  Alexei Likhachev, who inspected the turbine room and the control room and took part in the award ceremony for the workers at the plant and in the ceremonial planting of trees.

“I am proud that we are participating in a project that helped make Armenia's nuclear power plant safer and more efficient,” he said. “All of us - a team of professionals consisting of specialists from the Armenian NPP, repair companies, research institutes, design and engineering organizations in Armenia and Russia, as well as manufacturers of equipment for nuclear power plants - have performed a colossal amount of work to replace and modernize equipment. Thanks to the implementation of a whole range of measures, power unit 2 meets the most modern international requirements, and the station will continue to reliably provide electricity to the residents of Armenia.”

Based on the results of studies and inspections carried out by specialists from Rosatom enterprises, the technical parameters of the unit will now allow it to operate for an additional 10 years. “The Armenian NPP plays a decisive role in ensuring the energy security and independence of our country,” said Armenia’s Minister of Territorial Administration and Infrastructures, Gnel Sanosyan. “Without exaggeration, this large-scale project can be called one of the most important in Armenia.  We are not going to stop at this and set new goals for ourselves - this is the extension of the plant's life after 2026 by 10 years and the further development of the industry - the construction of a new nuclear power plant.”

Construction of a new unit is being planned and considered as it will be needed in 2036, Sanosyan told press conference. He said,   based on rough calculations, this will take 7-8 years. “We can consider 10 years. This means we need to start building the new NPP in 2026 or 2027 so that it can start operating when the life of the current one expires,” he said.

The currently operating Armenian nuclear power plant was built in the 1970s with two Soviet-supplied VVER-440-V230 units, but was closed following a devastating earthquake in 1988. However, unit 2 was recommissioned with Russian help in 1995 following severe energy shortages. In March 2014, the Armenian government decided to extend the plant’s service life to 2026 and it has now been extended until 2036.  Most of the overhaul (until 2019) was funded by an interstate loan from the government of the Russian Federation, the remaining work was carried out at the expense of the budget of Armenia.

Photo: Upgrades have been completed at Armenia's nuclear power plant, paving the way for operation until 2026