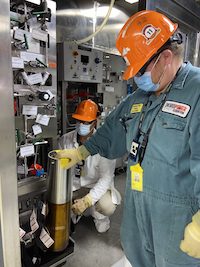 Laurentis will obtain the He-3 from tritium stored at the Darlington Nuclear Generating Station, about 100 kilometres east of Toronto. The tritium is removed from heavy water in the Candu station, owned and operated by OPG.

He-3 is extracted from Immobilised Tritium Containers (ITC) at the Darlington Station, which houses one of the world’s largest reserves of tritium. The tritium in the ITCs slowly turns into He-3, which releases into the void space of the container.

The He-3 isotope, as a stable (non-radioactive) inert gas, is extracted using a custom-designed tool developed by Laurentis and partners. Production of the isotope is expected before the end of the year.

“We’re especially proud to be the first civilian, non-military source of He-3,” said Jason Van Wart, Vice President of Laurentis. “By increasing the supply of this rare isotope, we can help save lives, advance high-tech industries and expand the frontiers of science.”

Laurentis will seek to develop a long-term commercial agreement with a company to further refine and distribute the He-3 to customers around the world in health care, security and advanced research. He-3 has a wide range of applications. As a medical isotope, He-3 is a non-toxic inhalant used to produce highly detailed Magnetic Resonance Imaging (MRI) of airways in the lung. In border security, it is used in portal monitors to detect radioactive materials. In neutron research, it is used in colliders to study the shadow world of anti-matter, one of the great mysteries of the universe. In quantum computing, He-3 is used to reach near-absolute-zero temperatures, which reduces noise or interference in calculations; it is similarly used as a super-coolant in cryogenics. It is also a potential fuel in fusion reactors.

Photo: ITC's being placed into the He-3 Tool by OPG's Don Perrie (right) and Chris Paciorek (left), on behalf of Laurentis (Credit: Laurentis)