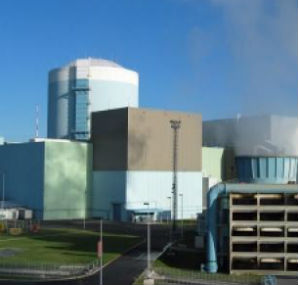 Two key post-Fukushima improvements to Slovenia's Krsko nuclear power plant have now been installed, a system to reduce explosive concentrations of hydrogen (passive autocatalytic recombiner, PAR), and a system to filter radiological gases in the event of a Fukushima-type reactor containment overpressurization. Both were part of a suite of measures mandated by the Slovenian nuclear regulator.

The passive containment filtered venting system, or PFCVS, is a first-of-a-kind dry system installed by Westinghouse. It consists primarily of five aerosol filters inside containment, and an iodine filter inside the auxiliary building and various auxiliary components (such as valves and rupture disks) to ensure its fully passive operation during more than 72 hours.

According to the regulator, venting will start when the containment pressure reaches the preset value (0.6 MPa or 88 psi). The aerosol and iodine filter removes solid particulates as well as gaseous elemental and organic iodine from the venting gas flow. In that way, less than 0.1% of fission products of the reactor core will be released into the environment.

Westinghouse said that design and installation was successfully completed in 15 months, allowing the power plant to rely on a compact and modular dry metal fiber filter to capture the aerosols instead of using a large water tank that other vent designs utilize. This innovative approach allowed significant flexibility on where the filter can be installed, and at Krško, part of the filter was installed in the containment building. Factory acceptance tests performed on the installed filters positively surpassed levels required by regulatory authorities and by Krško. Installation of the system was started during normal operation of the plant for the components located inside auxiliary building, including the new plant stack anchored on the reactor building. Installation of the equipment inside the reactor building, including closing of the containment penetration, did not impact the critical path of the 2013 outage in which both the PFCVS and the PARs were installed, it said.

Westinghouse said that its passive dry filter vent system does not require any auxiliary systems for chemistry control, heating, draining, and the like, nor power sources during standby or in operational mode. Due to the system's modular design, plants can install the system in existing buildings.