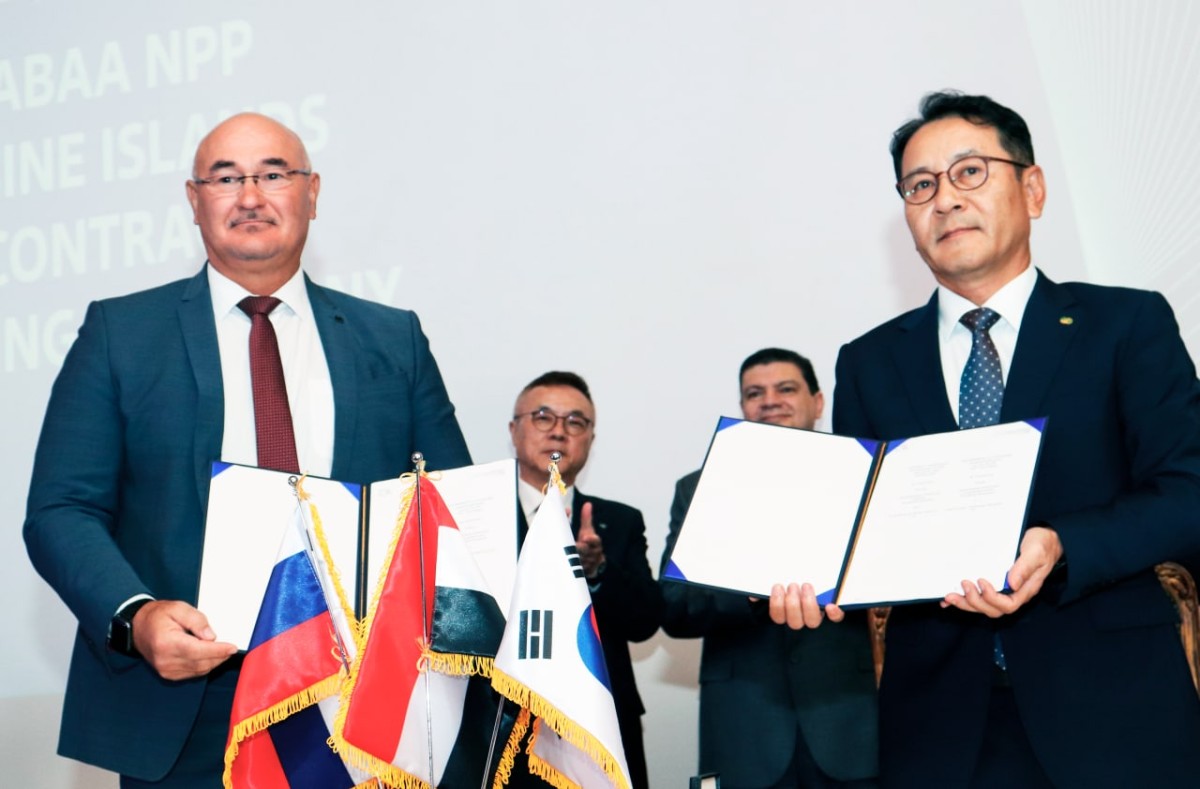 The Engineering Division of Russia’s Rosatom, JSC Atomstroyexport (ASE), and the Korean Hydro and Nuclear Power Corporation (KHNP) have signed a contract for the construction of the turbine islands at the El Dabaa NPP project in Egypt. KHNP will construct about 80 buildings and structures at the NPP’s four units, and will purchase and supply equipment and materials for the turbine islands of the units. “The Turbine Islands deal concluded with ASE can be seen as a significant achievement for Korea, said KHNP President Hwang Joo-ho. “Based on our experience gained in the UAE, KHNP will make every effort to ensure the success of the El Dabaa NPP project.”

The signing of the contract, valued at $2.25 billion, was preceded by serious preparatory work. As a result of consultations in December 2021, Rosatom approved KHNP as the only bidder permitted to negotiate and conclude a contract for the proposed transaction, subject to KHNP's compliance with the requirements of ASE procurement procedures and the parties agreeing to these conditions.

“Nuclear generation not only plays an important role in meeting the growing demand for electricity and achieving carbon neutrality around the world, but also connects countries,” said Boris Arseev, Director of International Business at Rosatom at the signing ceremony. “We at Rosatom are deeply convinced that cooperation in the field of nuclear technologies should not be interrupted in conditions of turbulence, but on the contrary, we should strengthen it and expand it in the interests of our countries.”

Alexander Korchagin, ASE Senior Vice President for NPP Construction Project Management, said the El-Dabaa project had begun full-scale construction in July. “The El-Dabaa NPP construction project is attractive for international companies. KHNP joins the pool of qualified participants in the Project, including large Egyptian companies selected to be involved in construction work at the site. “I am sure that the well-coordinated joint work of the Russian, Egyptian and Korean teams will achieve success in the implementation of this ambitious project.”

El-Dabaa NPP, Egypt’s first NPP, will be constructed in the city of El-Dabaa in Matrouh Governorate on the Mediterranean coast, some 300km north-west of Cairo. The plant will comprise four units with generation III+ VVER-1200 pressurised water reactors. The NPP is being constructed by Rosatom in accordance with contracts that entered into force in December 2017 based on an inter-governmental agreement signed by Egypt and Russia in 2015. The contracts specify that Russia will also supply nuclear fuel throughout the lifecycle of the plant, arrange for the training of the Egyptian personnel, and assist in the operation and maintenance of the plant for the first 10 years. The cost of the project is $30 billion, 85% of which is financed through a $25 billion Russian loan. Under another agreement, Rosatom will build a special storage facility and deliver casks for storing used nuclear fuel.

KHNP is planning to hold a business briefing session for domestic companies in September to enhance the understanding of the supply chain and to share key information such as bidding schedules in order to speed up the project.

A Ministry official noted that Rosatom is not on the US government sanctions list. "Yes, fundamentally Russia is sanctioned, but Rosatom is not on the sanction list, and therefore we won't have any problem getting paid." A Presidential Office official said the contract signing has been delayed because of Russia’s special military operation in Ukraine. "There could be a wide variety of uncertainties," the official said. "However, at the current stage, all problems have been solved. The government said it had been in contact with the US administration about the issue with promises of close cooperation

Separately, Rosatom reported that it will train 1,712 Egyptian specialists for the El-Dabaa project at a cost of RUB5 billion ($83m).According to documents posted on Rosatom’s public procurement website, the Technical Academy of Rosatom will have to prepare a full set of specialists for all positions for the operation and maintenance of this plant by the start of the power start-up of each unit.

The list of academic disciplines included in the training includes more than 100 items such as Russian language courses, administrative issues of NPP operation, personnel management, reactor physics and requirements for radioactive waste management. This will involve trained on simulators at the reference NPP in Russia, and then in Egypt on simulators at El-Dabaa.

Image: JSC Atomstroyexport and the Korean Hydro and Nuclear Power Corporation present the signed contract for construction of the turbine islands at the El Dabaa NPP project in Egypt (courtesy of Rosatom)