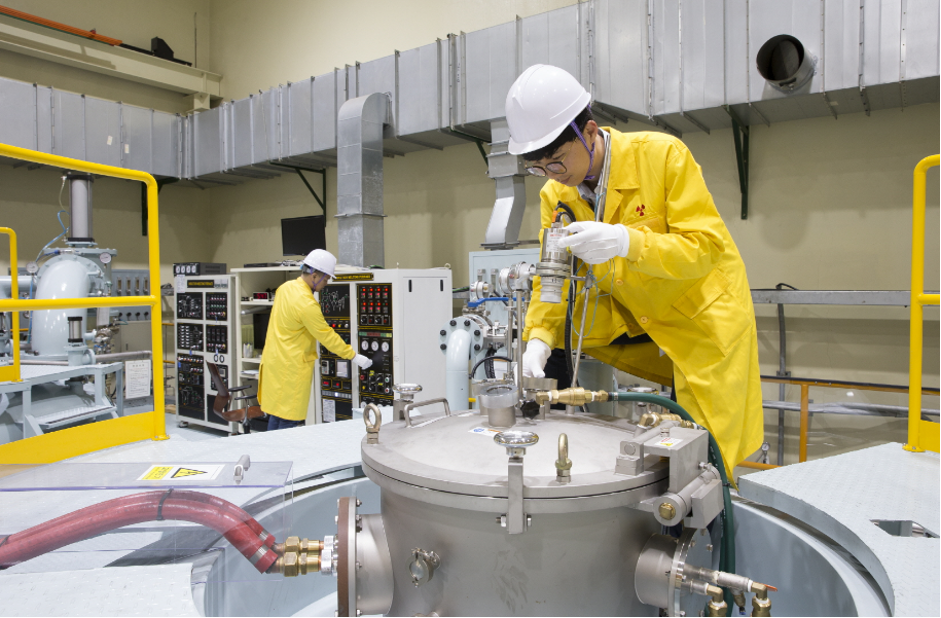 Maria is a 30MWt high flux water and beryllium moderated pool type reactor of a with graphite reflector and pressurised channels containing concentric six-tube assemblies of fuel elements. Maria achieved first criticality in 1974 and operated until 1985 when it was shut down for modernisation including enlargement of the beryllium matrix; inspection of the graphite bocks; and upgrading of ventilation and temperature systems. Further upgrading the technological system was done from 1996-2002 (during regular maintenance) including replacement of heat exchangers; replacement of instrumentation and control system; upgrading of radiation protection system; and modernisation of fuel element integrity monitoring system. The reactor was fully converted from high enriched uranium (HEU) to low enriched uranium (LEU) fuel in 2014. Maria is licensed to operate until 2025.

KEARI noted that , in previous studies, HEU was used as fuel to achieve high performance but proliferation concerns caused most research reactors to be converted to LEU. “To replace LEU while maintaining high performance, the density of uranium in nuclear fuel must be increased,” it noted. KAERI solved the problem “by developing the world's only centrifugal spray nuclear fuel powder manufacturing technology”. This “is a method of mass-producing fine and uniform spherical powder by melting uranium silicide at a high temperature of 2,000? and then spraying it on a disk rotating at high speed”. It generates less impurities than the existing method of crushing materials one by one, and it is possible to manufacture nuclear fuel plates with a high density of 5.3 gU/cc or more.

Currently, France, the USA, and Korea are the only producers of high-density LEU silicide plate nuclear fuel. KAERI started development in 2018 and “proved the excellence of domestic nuclear fuel in the Nuclear Fuel Performance Verification Joint Research Agreement signed with Belgium in 2021”. From December 2021 to March 2022, KAERI conducted the first stage performance verification of plate-shaped nuclear fuel in Belgium’s BR2 research facility confirming its safety.

KAERI said the business agreement with Poland is the first case in which nuclear fuel developed using purely domestic technology will be supplied overseas as a lead test assembly (LTA). “It is the final stage of performance verification in that it is separately manufactured in a customised shape for Maria, and it means that it has advanced to the stage of discussing exports.”

Jung Yong-jin, head of the research reactor nuclear fuel department at KAERI said, "Considering that the global nuclear fuel market is worth KRW300 billion ($230m) a year through research, if cooperation between the two institutions for nuclear fuel verification is successfully completed, KAERI can expect to achieve more than KRW30 billion in nuclear fuel exports per year." he explained.