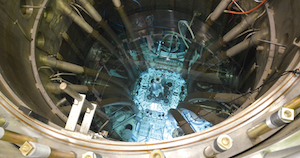 US Idaho National Laboratory (INL) has recently completed the sixth major core overhaul of the Advanced Test Reactor (ATR), which began operation in 1967.

The ATR design allows for multiple experiments to be conducted simultaneously, under different testing (power, temperature, coolant, and chemistry) conditions.

Now that the core overhaul is complete, ATR will begin a 50-day testing and measurement phase to calibrate new instruments and sensors for the reactor’s control systems and experiment loops.

ATR is expected to resume normal operations by late spring to test nuclear fuels and materials for the Department of Energy (DOE), the Navy’s nuclear propulsion programme, industry, and researchers from universities.

ATR shut down in April 2021 to begin the overhaul called a Core Internals Changeout (CIC) –– a process that replaces and updates internal reactor components.

As a nuclear materials test reactor, ATR generates very high levels of neutron irradiation that causes strain or microscopic damage to internal components, particularly its beryllium reflectors –– which help concentrate neutrons on the fuels and materials being tested.

The overhaul process occurs around every ten years and consists of three phases:

The replacement reactor components must be precisely aligned during installation to ensure proper operation of fuel and reactor safety systems, DOE said.