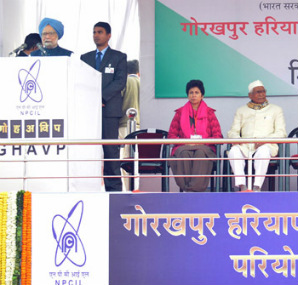 Indian prime minister, Manmohan Singh has laid the foundation stone for a new four-unit nuclear power plant at Gorakhpur, 170km north west of Delhi. The ceremony, held on 13 January 2014, was attended by around 30,000 people from the local area.

The station, which is expected to begin construction in mid 2015, will be known as Gorakhpur Harayana Anu Vidyut Pariyojana (GHAVP).

Indian prime minister, Manmohan Singh said in a statement that the first phase would cost an estimated Rs 20,594 Crore ($3.3 billion), and would create up to 10,000 jobs.

First nuclear concrete is expected in June 2015 for unit 1 and in December 2015 for unit 2, according to state-owned Nuclear Power Corporation of India Limited (NPCIL). The start of construction is subject to completion of site preparation works and the necessary regulatory approvals.

Unit 1 of the GHAVP project is expected to be finished "within 63 months from first concrete," or by September 2020, NPCIL said. Completion of unit 2 is expected to follow six months later, by March 2021.

Two more units will be built during the second phase of the GHAVP project, although NPCIL did not outline the schedule.

The reactors will be constructed on a 1319-acre site, located on the banks of the Bhakra canal in the northern state of Harayana.

Design of the Gorakhpur reactors

The Gorakhpur reactors will be of 'similar design' to the four 700 MW PHWRs currently under construction at Kakrapar in Gujarat (KAPP 3&4) and Rawatbhata in Rajasthan (RAPP 7&8) in India, NPCIL said.

The natural uranium fuelled PHWRs will be equipped with a combination of active and passive safety features, including two independent diverse shutdown systems, emergency core cooling though passive accumulators and active pumping system, as well as a double containment.

India currently has reactors 21 in operation with an installed capacity of 4800 MW. Five units are under construction, as well as a prototype fast breeder reactor (PFBR), which is expected to achieve first criticality in September 2014, according to the Department of Atomic Energy. Over the coming decade India aims to produce more than 27 GW of electricity from nuclear power, Singh said.