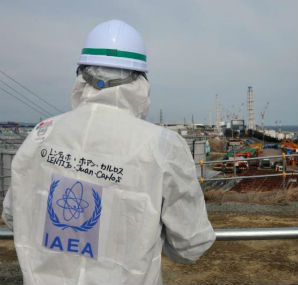 The International Atomic Energy Agency has completed a third review of Japan's efforts to plan and implement the decommissioning of the Fukushima Daiichi nuclear power station.

The 15-member review team said that Japan has made "significant progress" since its previous missions carried out in 2013, but said that the situation at Fukushima "remains very complex."

Team leader Juan Carlos Lentijo, IAEA Director of Nuclear Fuel Cycle and Waste Technology said that the increasing amount of contaminated water at the site, is posing a short-term challenge that must be resolved in a sustainable manner. Similarly, the need to remove highly radioactive spent fuel, including damaged fuel and fuel debris, from the reactors that suffered meltdowns poses a huge long-term challenge.

The IAEA team highlighted several key tasks that have been completed since its previous missions in April and November/December 2013. These included the removal of spent fuel from unit 4, improvements to the systems and tanks for treating and storing contaminated water, the startup of an underground water bypass system, and the cleanup of the site to reduce radiological dose.

The team also found areas that could be improved. It said: "All stakeholders should continue considering the future configuration of the site, which is an important factor for the long-term management of the very large amounts of radioactive waste already present and expected to be generated during the decommissioning process." It also encouraged TEPCO to develop an integrated plan for decommissioning and waste management at Fukushima, and stressed that current measures for storing contaminated water is a "temporary measure," highlighting the need for a more sustainable solution.

"The path ahead is long, complex and challenging," said Lentijo. "Japan is progressing step-by-step and plans are taking shape, which is a welcome development. It is important to maintain safety as the highest priority during all steps of the decommissioning of the site."

The IAEA said the team plans to deliver its final report to Japan by the end of March.