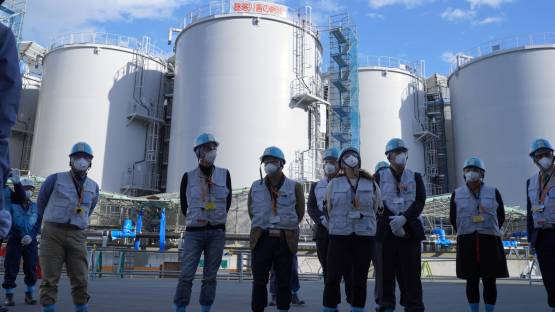 An International Atomic Energy Agency (IAEA) Task Force – set up last year to review the safety of the implementation of Japan’s Basic Policy to handle the treated water stored at the Fukushima Daiichi Nuclear Power Station – has carried out a new mission to review updated technical plans for the water discharge.

These updates by Japan – made in part due to the feedback provided during the ongoing IAEA safety review process – include changes to the radiological environmental impact assessment prior to the discharge and the associated monitoring programmes.

Japan announced its Basic Policy in April 2021 on handling more than 1.25 million cubic metres of treated water stored at the plant by discharging it into the sea, subject to approval from Japan's Nuclear Regulation Authority (NRA).

The IAEA’s Task Force, a group of IAEA specialists and external experts from 11 countries, are conducting a multiyear review of the safety of Japan’s discharge plan against relevant IAEA international safety standards. The Task Force met with JTokyo Electric Power Company (Tepco), operator of the Fukushima Daiichi NPP, and the Ministry of Economy, Trade and Industry (Meti) as part of its second mission to assess safety related elements of Tepco’s implementation plan.

The water stored at the tanks in the Fukushima Daiichi site is treated using Advanced Liquid Processing System (ALPS) to remove most of the radioactivity. Tritium, which cannot be removed by ALPS, and some very low levels of other radionuclides, remain in the water after processing. A proper characterisation of the radioactivity in the water is necessary for conducting an accurate radiological environmental impact assessment for ensuring safety to people and the environment before the water starts to be released, planned for 2023.

In the report of the first meeting with Tepco/Meti in February 2022, the Task Force, among other points, called for further clarification of the characterisation of the treated water that will be discharged. In reviewing the updated plans this week, the Task Force noted that Japan had addressed this issue in its amendments. The Task Force will continue its consideration of these specific aspects.

“The Task Force’s findings from its first mission in February 2022 were considered in depth and have been reflected in Japan’s revisions to the plan. The IAEA will continue its impartial and science-based review of the proposed discharge plan,” said IAEA Director General Rafael Mariano Grossi

The Task Force also visited the Fukushima Daiichi NPP to review the progress made in the design and construction of equipment and facilities for the discharge, including the tunnel that is being built to transport the treated water one kilometre out to sea.

“It was vital that the Task Force saw for themselves the advances made in the construction of the water dilution facility and the undersea tunnel,” said Gustavo Caruso, Director, IAEA Department of Nuclear Safety and Security and Chair of the Task Force. “Our visit to see the equipment and facilities to be used for the discharge is essential to further reinforce our understanding of the process as part of our safety review.”

Upon accepting the request of Japan last year for the IAEA to provide assistance to ensure the discharge is carried out in a safe and transparent manner, consistent with IAEA international safety standards, Grossi said the IAEA would conduct the review before, during and after the release. This comprehensive review was set up to cover three aspects: the technical aspects; regulatory aspects; and independent sampling and analysis.

A report the latest mission will be made available within three months. IAEA will publish a comprehensive assessment on the safety of the discharge, including all components of the review – technical, regulatory and independent sampling and analysis - prior to the planned release in 2023.

The Task Force will conduct its next mission to meet with NRA in Japan to continue its direct discussions on the regulatory aspects of the discharge from 16 to 20 January 2023.