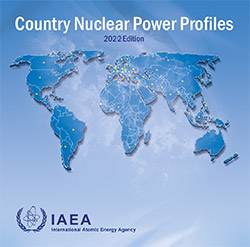 The International Atomic Energy Agenry (IAEA) has announced the release of the 2022 edition of Country Nuclear Power Profiles (CNPP), marking more than two decades since the initial launch of the Agency’s comprehensive guide on the status and development of national nuclear power programmes worldwide.

“The Country Nuclear Power Profiles have been fulfilling a vital need for a high-level overview of nuclear power infrastructure and developments of nuclear energy programmes in participating member states since 1998,” said Aline des Cloizeaux, Director of the IAEA’s Division of Nuclear Power. “The consolidated set of reports, publicly available on the IAEA CNPP website and updated annually with the publication, typically ranks among the IAEA’s top 10 most accessed documents.”

The 2022 edition also highlights key trends, including the increase in the number of national commitments to the development of nuclear power infrastructure; increased collaboration among IAEA member countries, the Agency and various other stakeholders; the importance of human resource development; progress in research and development to bring on board advanced reactor designs; as well as the need for robust plant life management for safe long-term operation programmes.

Over the last few years, the CNPP has become more integrated with the IAEA's Power Reactor Information System (PRIS) database, which gathers statistical data about nuclear plant operations, energy and electricity use directly from national contributions. Together, both databases present a holistic and authoritative summation of the nuclear power programmes of participating countries. The latest PRIS publication, published in July, “Nuclear Power Reactors in the World”, features full nuclear power operating statistics for 2021 provided by IAEA member countries, demonstrating how, amid evolving global crises, nuclear power reached its second highest annual output of the last decade as the world emerged from the COVID-19 pandemic.

Next year, the Agency will launch a new CNPP database and website, said Shin Whan Kim, Head of the IAEA’s Nuclear Power Engineering Section, which produces the annual CNPP report. “This new and improved platform will reflect the high level, publicly prominent and considerable efforts of the Member States who voluntarily provide this authoritative and critical information.”