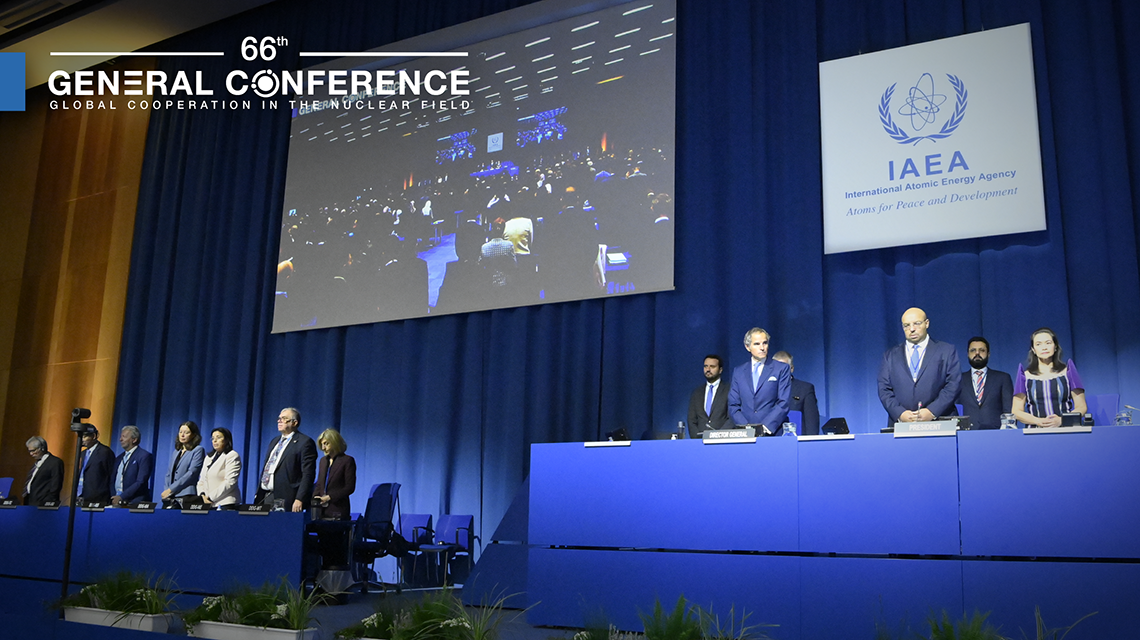 The IAEA is addressing some of today’s biggest global challenges, IAEA Director General Rafael Mariano Grossi told delegates at the opening of the Agency’s 66th annual General Conference which ran from 26-30 September.

“At the IAEA, we have the ability to mitigate some of these enormous challenges we are facing,” Grossi said. The IAEA and its member states are harnessing the benefits of nuclear science and technology to better prepare for the next zoonotic disease outbreak; to mitigate and adapt to climate change; to improve food and water security; to fight cancer; and to clean up the ocean.

The IAEA has also responded to emergencies with missions as different as those to Ukraine in efforts to prevent war from causing a nuclear accident and experts’ visits to Latin America to assist Andean nations in preventing Fusarium Wilt from decimating their economically critical banana crops.

In his speech, Grossi highlighted the role of nuclear energy in helping countries to meet their energy needs and in addressing the ‘existential crisis’ of climate change. Today the 430 nuclear power reactors operating in 32 countries supply about 10 per cent of the world’s electricity and around a quarter of all low-carbon electricity. Furthermore, there are 57 reactors under construction in 18 countries, according to the IAEA’s Power Reactor Information System (PRIS).

The IAEA has revised up its annual projections of the potential growth of nuclear power capacity to 2050. The climate crisis and the energy crisis have prompted more countries to look to nuclear power as part of the solution, he said. “Many of you, especially from developing countries, are coming to us saying, ‘We also want to benefit from this clean source of energy, in particular in its new manifestation through small modular reactors,” he said. “The Agency is going to help to build the capacities that you need and deserve.”

In its new outlook for global nuclear capacity for electricity generation by 2050, the IAEA has increased its high case scenario by 10% compared with last year’s report. In 2021, the Agency revised its up annual projections for the first time since Japan’s Fukushima Daiichi nuclear accident in 2011.

“We are at a defining moment in the world’s transition to a more secure, stable and affordable energy future,” Grossi said. “Driven by the impacts of climate change and the energy crisis, governments are reconsidering their portfolios in favour of nuclear power. But for the high case scenario to be achieved, a number of challenges need to be addressed, including regulatory and industrial harmonisation and progress in high level waste disposal.”

The annual outlook identifies climate change mitigation and energy security as key drivers of decisions to continue or expand the use of nuclear power, citing recent events such as the COVID-19 pandemic, geopolitical tensions and military conflict in Europe as having impacted the reliability of energy systems, impeded energy flows across regions and led to significant increases in energy prices.

A number of member states are revising their national energy policies, says the report, leading to decisions to extend operation of existing reactors and plans for new construction of advanced reactors, and the development and deployment of small modular reactors (SMRs). While a large number of reactors are scheduled for retirement in the coming years, ageing management programmes and long term operation are being implemented for an increasing number of existing reactors, with new policy measures being adopted to support their competitiveness in liberalised electricity markets.

According to the new projections and assuming electricity generation will increase by 85% over the next three decades, nuclear energy could contribute about 14% of global electricity by 2050, up from its 10% share today. Coal remains the dominant energy source for electricity production but has gradually decreased a few percentage points since 1980. In recent years, the share of solar and wind has undergone a rapid increase, rising from less than 1% in 1980 to 9% in 2021.

The use of nuclear power has avoided about 70 gigatonnes of CO2 emissions over the past 50 years. Meeting global climate commitments is reliant on energy policies and market designs to facilitate investments in low carbon technologies. For nuclear, besides the challenge of financing, regulatory harmonization and industrial standardization of designs would help with the rate of deployment of new nuclear. Progress in implementation of high level waste disposal is also needed.

The report also says that almost half of the CO2 emission reductions needed to reach net zero in 2050 will need to come from technologies that are currently under development but are not yet on the market. For nuclear, accelerating the pace of innovation and demonstration of advanced nuclear reactors including SMRs is required if nuclear is to play a role in decarbonisation beyond electricity by providing low carbon heat or hydrogen to the industrial and transport sectors.

Since it was first published over 40 years ago, the IAEA’s projections have been continually refined to reflect an evolving global energy context. Over the past decade, nuclear power development has remained within the range of projections described in prior editions.