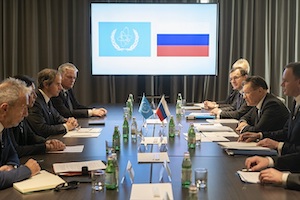 Ukraine informed the International Atomic Energy Agency (IAEA) on 1 April that it was “analysing the possibility” of resuming regulatory control of the Chernobyl nuclear power plant, after Russian forces withdrew from the site, Director General Rafael Mariano Grossi said.

Ukraine also said it was preparing for the rotation of Chernobyl NPP staff, including making an assessment of their safety, but no date had yet been set for this. The most recent turnover of technical personnel at the site took place on 20-21 March, which was the first change of work shift since late February.

Grossi returned from a fact-finding visit to Ukraine and Russia on 1 April and immediately addresses a press conference.

He said in Ukraine he visited the South Ukraine NPP where he held talks with the Energy Minister, nuclear utility Energoatom and the nuclear regulator and also talked with technical people from the station. This was important in order to assess the situation on the ground and the wider context, he noted.

Grossi then moved on to Kaliningrad in Russia, where he had talks with Rosatom’s Director General, the Ministry of Foreign Affairs and the Russian regulator to discuss the situation from their perspective. He said work had already started and would continue in the next few days.

In reply to questions Grossi explained he had made separate agreements with Ukraine and Russia but no trilateral agreement. “What’s important is safety and security”, he said, and there is “no sense” in negotiating deal after deal.

Ukraine had submitted a very detailed list of its requirements for assistance and equipment, he noted, adding that he had already delivered some portable radiation monitoring equipment. Advice and assistance was also being provided remotely from Vienna and many IAEA member states had also offered assistance, he said. However, it was necessary to reconcile what was required with what was available.

He said the IAEA hoped to have a physical presence at each site to better understand what was needed and to assess logistical considerations, but this did not require a large number of people. IAEA had also agreed to put in place some kind of rapid assistance mechanism to respond immediately to any emergency situation that may arise.

Grossi stressed the importance of safeguards in a conflict situation where there was  nuclear material, noting that remote monitoring had been interrupted. However, he said that once IAEA monitoring equipment was replaced it would not take long to verify material. “We know what was there and it can be done quite quickly – the sooner the better.” He said he had no information suggesting that any material had disappeared.

He said Russia’s withdrawal from Chernobyl was a good sign “and we will be there very soon – there is a lot of work to be done”. He stressed that the IAEA would not put is staff in harm’s way and would need to be guaranteed safe passage. He confirmed that the radiation situation around Chernobyl was normal despite slight increases being briefly detected, which he said were localised and probably caused by the movement of heavy vehicles when the Russian troops arrived and left. He could not confirm reports that Russian soldiers had been contaminated.

He concluded by saying IAEA hoped to deliver equipment needed to each site. “A good diplomat has a  toolbox and will  use whatever took is needed to do the job,” he noted. He said that, despite the suffering arising from the conflict, he had come back “with a positive feeling”.

Grossi later said he would head an assistance and support mission to Chernobyl "as soon as possible" to help ensure the facility's safety.

In a tweet, he said that the mission "will be the first in a series of such nuclear safety and security missions to Ukraine”.

Meanwhile, Rosatom confirmed that in Kaliningrad, Rosatom and the IAEA had discussed the safety of nuclear facilities in Ukraine.

After the meeting, Rosatom Director General Alexei Likhachev said the key topic of the talks was the issue of ensuring nuclear and physical security. “The main task of Rosatom is to assist the IAEA in the safe operation of Ukrainian nuclear facilities,” he said. “It is important to do everything so that the IAEA has full information about the events taking place and, of course, under the most difficult conditions, to enable specialists and maintenance personnel of the stations to perform their duties. We exchanged views and outlined further ways of cooperation and operational interaction.”

He added: “As a result of this conversation, I want to emphasise the highest professionalism of the Agency, its head and the entire delegation involved in this work, as well as a balanced and, most importantly, depoliticised approach to events, an exceptional concentration of attention and efforts on nuclear safety issues.

Grossi reportedly thanked Likhachev for prompt cooperation and partnership. He emphasised: “We recognise the importance of the joint work of the IAEA, as a global nuclear institution, Russia and Ukraine in ensuring nuclear safety, even in these very difficult circumstances. This is necessary in order to keep the chance of nuclear accidents at zero.”

Grossi added: “Next week, a number of IAEA missions to Ukraine's nuclear facilities begin. Our goal is to continue working together and make sure that the numerous facilities of the Ukrainian nuclear industry are in a controlled state. In general, I can say that the situation is under control, but there are things that require clarification. The agency will work to clarify the situation and assess it.”