IAEA continues to press for visit to Zaporizhzhia NPP 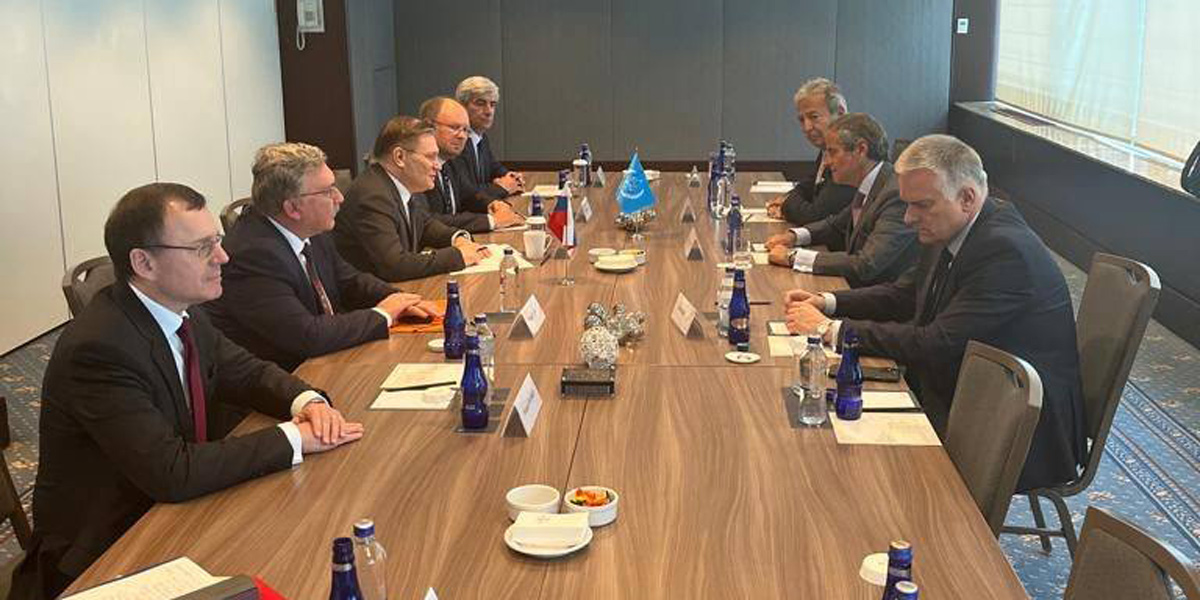 Ukraine has informed the International Atomic Energy Agency that renewed shelling in recent days caused additional damage in the area of the country’s Zaporizhzhia Nuclear Power Plant (ZNPP), once again highlighting the serious nuclear safety and security risks facing the facility and underlining the urgent need for an IAEA expert mission to go there, Director General Rafael Mariano Grossi said on 23 August.

Ukraine informed the IAEA that the shelling on 20 and 21 August damaged ZNPP infrastructure including laboratory and chemical facilities, Grossi said. In addition, shelling on 22 August damaged the transformers of the nearby thermal power plant, causing a disconnection of the power line linking this plant to the ZNPP lasting several hours before it was restored later the same day.

“These incidents show why the IAEA must be able to send a mission to the Zaporizhzhia nuclear power plant very soon. I’m continuing to consult very actively and intensively with all parties so that this vital IAEA mission can take place without further delay. The IAEA’s presence will help stabilise the nuclear safety and security situation at the site and reduce the risk of a severe nuclear accident in Europe. The mission is expected to take place within the next few days if ongoing negotiations succeed,” Grossi said.

In addition to the now restored back-up line to the thermal power plant, the ZNPP has one operational power line connecting it to the grid out of a total of four such lines. A secure off-site power supply from the grid is essential for ensuring nuclear safety.

The IAEA has not been able to visit the ZNPP since before the conflict began in February. Since early March, it has been controlled by Russian forces, but the Ukrainian staff are continuing to operate the plant. Moscow has repeatedly over the past several months urged IAEA to visit ZNPP, but Petro Kotin, head of the Ukrainian nuclear utility Energoatom, has refused to contemplate this as long as Russia remains in control of the plant. However, Ukrainian President Volodymyr Zelensky recently agreed that an IAEA mission should visit the plant provided that it travelled there through Ukrainian territory. Russia, for its part, has said the only safe way to reach the plant is through Russian territory, noting that travelling from Kyiv would entail passing through the frontline putting IAEA personnel at risk

Russia’s National Guard and Nuclear, Biological and Chemical Defense Troops are stationed at ZNPP. The Russian Defense Ministry has consistently alleged that Ukrainian troops are firing at the plant and the nearby operators’ city of Energodar from Nikopol on the opposite site of the large Kakhovka water reservoir. Ukraine and the USA, however, continue to accuse Russia of shelling the plant.

Diplomatic efforts continued to resolve the differences with Russia calling a UN Security Council (SC) meeting on 23 August for the second time within two weeks. Russia’s Ambassador to the UN Vasily Nebenzya said the situation had deteriorated since the previous SC meeting, with Ukrainian forces of shelling the plant daily. He insisted that Russia does not deploy any heavy weapons at the plant or use it for military purposes and offered to provide high resolution photographic evidence as proof. Sergiy Kyslytsya, Ukraine's ambassador, responded that Russia is responsible and must withdraw its troops . He insisted that the ZNPP should be a demilitarised zone and handed back to Ukraine. Speaking at the beginning of the meeting, UN Undersecretary Rosemary DiCarlo also called for a demilitarised zone.

France continued its mediation attempts, following the telephone conversation between the French and Russian Presidents on 19 August during which both agreed on the need for and IAEA inspection. On 24 August Russian Foreign Minister Sergei Lavrov spoke by telephone to his French counterpart Catherine Colonna about the expected visit. Russia's foreign ministry issued a statement saying Lavrov and Colonna "discussed in detail the situation around the Zaporizhzhia nuclear power plant and the opportunities available for organising a visit to the station by an IAEA mission".

Also on 24 August, the Director General of Russia’s Rosatom State Corporation Alexey Likhachev met with the IAEA Director General Grossi in Istanbul. Earlier, on 18 August, Turkish President Recep Tayyip Erdogan had met with UN Secretary General Antonio Guterres and Ukrainian President Volodymyr Zelensky in the Ukrainian city of Lviv. While it was generally agreed that an IAEA mission should visit ZNPP as soon as possible, nothing concrete had resulted from that meeting.

The Istanbul meeting was also attended by Alexander Trembitsky, Head of Russian nuclear regulator Rostechnadzor, and Mikhail Ulyanov, Permanent Representative of the Russian Federation to International Organisations in Vienna. The meeting discussed in detail the whole range of issues related to the planned IAEA mission to ZNPP, Rosatom said. “It was confirmed that the Russian side shares the IAEA Director General's intention to conduct such a mission in the near future, as soon as the military situation on the ground allows, and is ready to provide all possible support, including logistical support, in its organisation. The parties will continue to cooperate on these issues.”

Image: The heads of Rosatom, Rostekhnadzor and the IAEA meet to discuss the planned IAEA mission to the Zaporizhzhia nuclear power plant in Ukraine (courtesy of IAEA)