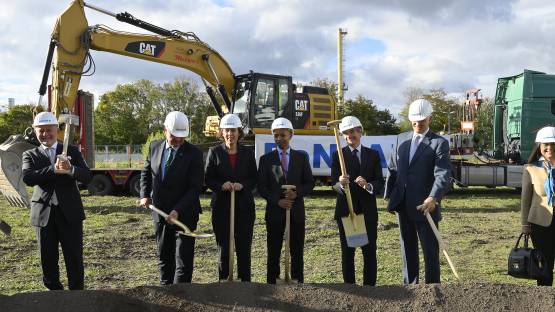 A ground-breaking ceremony was held on 3 October at the IAEA’s laboratories in Seibersdorf, Austria, to mark the start of construction of its new nuclear applications laboratories building.

“After two years of hard preparation, we now begin construction to complete the modernisation of our invaluable Seibersdorf labs — laboratories that make important contributions in the global fights against disease, climate change and world hunger,” said IAEA Director General Rafael Mariano Grossi at the ceremony. The event, which was attended by representatives from 30 IAEA member states, and host government representatives from the federal level, Regional Government of Lower Austria and Seibersdorf Town, marks a crucial milestone in the completing the second phase of the Renovation of the Nuclear Applications Laboratories initiative, known as ReNuAL2.

“As a year, 2020 was a wake-up call on human vulnerability to disease, climate disaster, food insecurity and environmental degradation,” Grossi said. “The pledges to this project by our member states are helping to ensure our labs remain modern and can continue to play a vital role in addressing these pressing challenges.” He thanked contributing countries for their generosity, and Austria for its hospitality.

To date, ReNuAL2 has raised over €20 million ($19.75m) from 28 supportive countries. The ground-breaking ceremony the IAEA’s 66th General Conference, where the Agency celebrated the most recent donations from Belgium, Saudi Arabia and the USA. Strong financial support allowed the IAEA to sign a contract on 29 September to begin construction on the new laboratories building.

The new building will house three laboratories: Plant Breeding and Genetics (PBGL), Terrestrial Environment and Radiochemistry (TERC), and Nuclear Science and Instrumentation (NSIL). Thematically these laboratories will help countries address challenges related to climate change, food security, environmental management and more. Major construction on the new building is expected to be complete by the end of 2024.

As part of ReNuAL2, the IAEA also plans to build new greenhouses — necessary for its work in plant breeding, food safety, soil and water management and crop nutrition — to be adjoined to the new laboratories building. Resource mobilisation efforts will now focus on obtaining the funding needed for this last element of the ReNuAL2 initiative.

This year marks the 60th anniversary of the nuclear applications laboratories at Seibersdorf. The groundbreaking for ReNuAL2 is the latest milestone in a decade-long effort to modernize the facilities.

In 2014, the Renovation of the Nuclear Applications Laboratories (ReNuAL) was launched to deliver a new Insect Pest Control Laboratory building, a new medical linear accelerator facility for the IAEA’s Dosimetry Lab, and the Amano Laboratories building — named after the late Director General Yukiya Amano and opened in 2020, housing the Animal Production and Health (APHL), Soil and Water Management and Crop Nutrition (SWMCNL), and Food Safety and Control (FSCL) laboratories.

In September 2020, Grossi launched ReNuAL2, with the aim of constructing the new laboratories building, refurbishing the Dosimetry Laboratory, and replacing the aged greenhouses used by the PBGL, SWMCNL and FSCL.

Image: The ground-breaking ceremony at Seibersdorf (courtesy of IAEA)