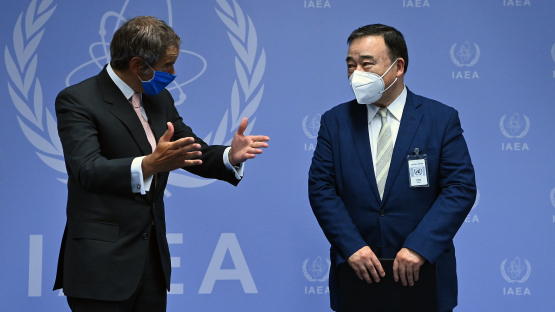 The International Atomic Energy Agency (IAEA) and Japan have agreed to begin implementing the on-site safety review of the water release at Fukushima Daiichi in September.

IAEA officials will travel to Japan for on-site meetings to discuss the plans and activities for the water discharge, as agreed during a meeting of IAEA Director General Rafael Mariano Grossi and Japan’s Minister of Economy, Trade and Industry Hiroshi Kajiyama on 19 August.

Japan announced its basic policy in April 2021 to discharge the treated water into the sea in about two years’ time. Shortly after this announcement, Japan requested the assistance of the IAEA and the Agency accepted. The Agency’s visit will be the first in a series of missions over the coming years as it fulfils its commitment to support Japan before, during and after the water disposal. The entire operation is expected to last for decades.

“The Minister’s visit today is an important step in our preparations to support Japan with the discharge of water,” said IAEA Director General Rafael Mariano Grossi, on 19 August. “Japan's invitation for the Agency to make its first visit on the ground at this early stage, especially during the ongoing pandemic, shows their willingness to conduct the entire operation in a safe and transparent manner. These on-site meetings and activities will help build confidence that the discharge takes place in line with the international safety standards which aim to protect people and the environment.”

During the first visit in September, IAEA senior officials will meet with Japanese officials and technical experts in Tokyo and Fukushima. This will kick off implementation of the IAEA’s project to assess that the discharge is conducted with no adverse impact to people or the environment.

Minister Kajiyama welcomed the development as the latest in a long history of IAEA support to Japan. “The IAEA has been cooperating extensively with Japan on our efforts to deal with the aftermath of the Fukushima Daiichi accident. The Agency will play a vital role in reviewing and monitoring the safe implementation of our plan to discharge the treated water into the sea”.

In July 2021 the Agency and Japan agreed on the scope of the technical assistance to be provided. The IAEA will review the country’s plans and activities against international safety standards and assist with environmental monitoring of the impact of the water release on seawater, marine sediment and fish near the Fukushima Daiichi plant.  An IAEA Taskforce was established to implement a detailed programme of activities. This Taskforce includes technical support from internationally recognized experts from Member States, including members from the region, working under the authority of the IAEA Secretariat.

Since 2011, the Agency has provided technical assistance to further support Japan’s efforts in areas such as radiation monitoring, remediation, waste management and decommissioning. IAEA said that, during the latest meeting, the two parties also discussed the ongoing Fifth International Peer Review of Japan’s Mid-and-Long-Term Roadmap towards the Decommissioning of Tepco's Fukushima Daiichi Nuclear Power Station and agreed to strengthen cooperation in nuclear human resources development and in public information about nuclear energy.

Want an update on nuclear decommissioning progress at at Fukushima Daiichi?

Ono will discuss implementation of the 'Mid-and-Long-Term Decommissioning Action Plan’, including decommissioning projects such as water management, fuel removal from the spent fuel pools, preparations for fuel debris retrieval and more.