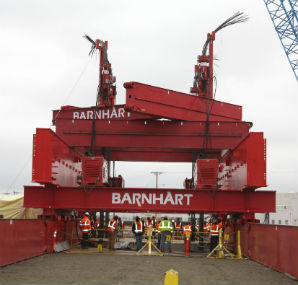 The Plutonium Recycle Test Reactor, which was used to develop alternative fuels for the US nuclear industry during the 1960s, has been removed from the 300 Area of the Hanford site in Washington State.

The 1080-ton reactor will now be transported for disposal at the Environmental Restoration Disposal Facility, Hanford's onsite landfill for low-level mixed waste, the US Department of Energy (DOE) said in a statement. The transport is due to take place this weekend (25-26 January 2014), weather permitting.

Washington Closure, a limited liability company comprising URS, Bechtel National and CH2M Hill is managing the clean-up of the 220 square mile section of land bordering the Columbia River for DOE.

"It took months of detailed planning and extensive preparatory work to reach the point where the reactor could be removed," Sax said.

The reactor was lifted using four 450-ton strand jacks mounted on a 30-foot-tall mobile lifting frame. The reactor has a transport weight of 1538 tons, and will be moved to the disposal site on a high-payload-capable Goldhofer trailer.

Removal of the reactor followed demolition of a 100-foot exhaust stack in 2010 and removal of the 67-ton carbon steel reactor dome in early 2011.

The Plutonium Recycle Test Reactor, a heavy water moderated reactor with an output 100 MW, was the largest of Hanford's experimental reactors. It began construction in 1959 and achieved first criticality the following year. The reactor was shut down in 1969, after contamination from intentionally defective fuel assemblies, according to the International Atomic Energy Agency (IAEA) Research Reactor Database.