Hamaoka NPP to shut down for upgrades 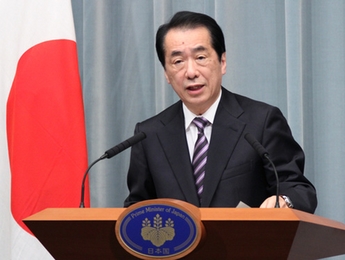 Kan speaking on 6 May

Speaking during 6 May press conference, Kan said that there was an 87% probability of a Magnitude 8 earthquake hitting the Tokai region within 30 years, according to the Headquarters for Earthquake Research Promotion.

Kan said that given the situation, it is necessary to take mid-to-long term measures to resist the expected Tokai Earthquake. Such measures include the construction of a 12-meter high seawall to protect the station from tsunami and plans to install additional emergency diesel generators at higher ground, which have already been announced by Chubu.

Chubu Electric Power Co has already postponed the restart of the oldest reactor Hamaoka 3, which was shut for periodic inspection when the 11 March earthquake hit. Kan has asked for the remaining two units to close until the upgrade measures are completed.

Kan said that the request to stop nuclear reactors was not based on legally binding instructions. Instead, the prime minister said that he intends to persuade Chubu Electric Power Co. to go ahead with the closure.

At the May 9, 2011 meeting of the Board of Directors, Chubu Electric Power Company, Inc. decided to suspend operation of Hamaoka Nuclear Power Plant until further measures to prevent tsunami are completed, as requested by the prime minister.