Halfway towards defueling Sizewell A 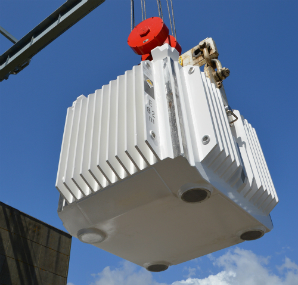 More than half of almost 53,000 nuclear fuel elements have been removed from two reactors at Sizewell A, and defueling is on track to be completed by September 2014, Magnox Limited has announced.

The twin reactors at Sizewell A shut down in 2006, but defueling did not begin until August 2009. The delay was due to 'challenges' at the Sellafield reprocessing plant, which meant that fewer flasks were available to transport the fuel. Also, priority for them was given to sites that had still-generating reactors.

"Removing spent fuel from reactors and transporting it to Sellafield for reprocessing is a complex process, but Magnox is using all its experience and expertise to deal with the legacy of this first generation of nuclear power stations," said site director Tim Watkins.

"It is good news that with defuelling recently completed at our Chapelcross site, Sizewell A now has priority for flasks and is making steady progress with fewer than 160 flasks of fuel left to dispatch," he added.

Watkins, who is "confident" that his team will meet the September 2014 target for defueling, said that once all the fuel has been dispatched the radiological hazard on the Sizewell A site will have been reduced by "more than 99 percent."

The fuel is transported in a flask which is heavily shielded and purpose built. Constructed from forged steel more than 30cm thick, each flask weighs more than 50 tonnes and holds no more than 2.5 tonnes of fuel.