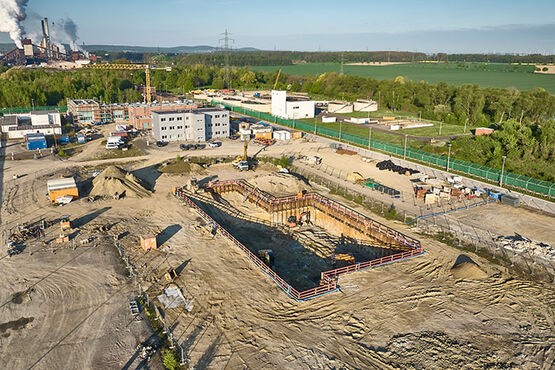 Germany’s Bundesgesellschaft für Endlagerung (BGE) has awarded a contract for the construction of the facility to which low-level and medium-level radioactive waste will be sent to be reloaded from 2027. With a total length of 140 metres the reloading hall, with an attached buffer hall, will be the largest building erected on the site of the Konrad 2 mine.

Hanover-based Ed. Züblin AG will undertake the complex construction project following a Europe-wide award procedure, in which four other competitors had participated. The start of construction for the reloading hall is scheduled for the first quarter of 2023 for completion in 2025. In the building complex, the waste packages will be radiologically checked, lifted off trucks and rail wagons and prepared for transport underground through the storage shaft Konrad 2. The buffer hall, which is directly connected to the reloading hall, can accommodate containers at short notice in the event of unforeseeable standstills of the shaft hoisting system.

High demands are placed on the reloading and buffer hall. The building complex is classified as a quality assurance area 3. This means, among other things, that the building is earthquake-proof. The construction work is supervised by various authorities including the Federal Office for the Safety of Nuclear Waste Management (BASE).

BGE is a federal company in the business area of ??the Federal Environment Ministry. In April 2017, BGE assumed responsibility as the operator of the Asse II mine and the Konrad and Morsleben repositories from the Federal Office for Radiation Protection. Its other tasks include the search for a repository site for the disposal of the highly radioactive waste generated in Germany based on the Site Selection Act that came into force in May 2017.