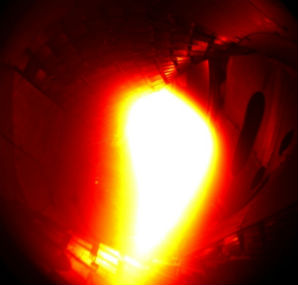 First plasma has been produced at the Wendelstein 7-X, the world's largest stellarator-type fusion device, at Germany's Max Planck Institute for Plasma Physics (IPP) in Greifswald. IPP, the first plasma had a duration of one tenth of a second and achieved a temperature of around one million degrees.

This marked the launch of experimental operations to investigate the potential suitability of this type of device as a power plant, IPP noted. "Wendelstein 7-X...will not produce energy. Nevertheless, it should demonstrate that stellarators are also suitable as a power plant," IPP said in a statement posted on its web site.

The main assembly of the Wendelstein 7-X was completed in April 2014 after nine years of construction and more than a million assembly hours. IPP said: "The operational preparations have been under way ever since. Each technical system was tested in turn, the vacuum in the vessels, the cooling system, the superconducting coils and the magnetic field they produce, the control system, as well as the heating devices and measuring instruments."

According to project leader Professor Thomas Klinger: "We're starting with plasma produced from the noble gas helium. We're not changing over to the actual investigation object, hydrogen plasma, until next year. This is because it's easier to achieve the plasma state with helium. In addition, we can clean the surface of the plasma vessel with helium plasmas."

Currently only the International Thermonuclear Experimental Reactor (Iter) under construction in Cadarache, France is thought to be capable of producing an energy-supplying plasma, Iter is a tokamak device.

"Wendelstein 7-X is to put the quality of the plasma equilibrium and confinement on a par with that of a tokamak for the very first time, "IPP said. "And with discharges lasting 30 minutes, the stellarator should demonstrate its fundamental advantage - the ability to operate continuously. In contrast, tokamaks can only operate in pulses without auxiliary equipment."

The €370m ($406m) Wendelstein 7-X is being funded by the German federal and state governments and also by the EU.