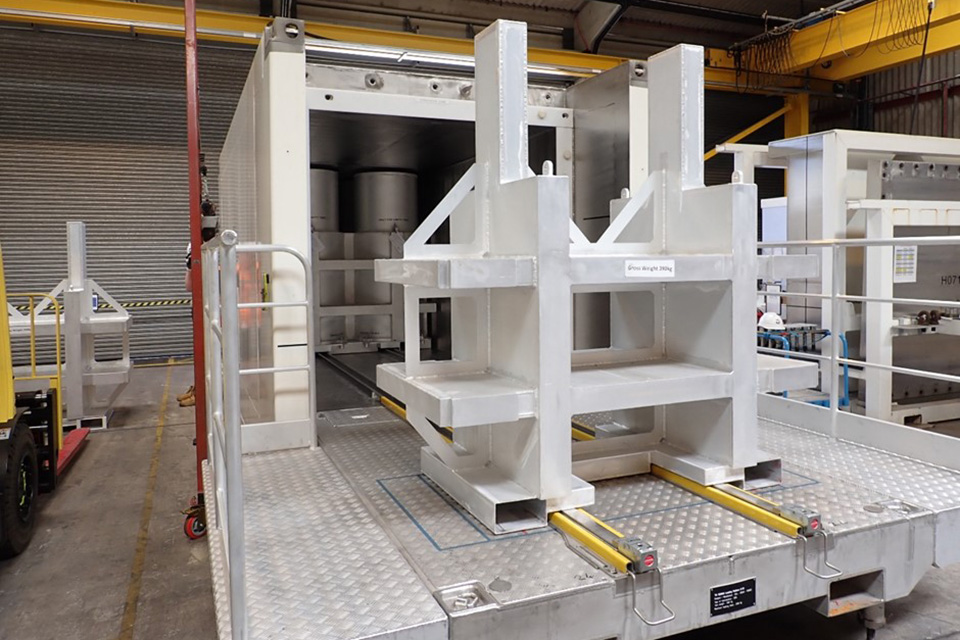 Around 800 concrete-lined drums of Intermediate Level Waste will be transferred over the next three years for interim safe storage at Sellafield under the project, which forms a critical part of the NDA’s Nuclear Materials Transfer (NMT) programme, ahead of eventual disposal in a Geological Disposal Facility (GDF).

As part of the NWS Type B programme, the three-strong Gemini fleet of specialist packages spent two years in France with ORANO NPS undergoing a condition assessment and refurbishment before undergoing extensive Site Acceptance Testing at Sellafield and Harwell to ensure their readiness for a return to service.

NWS Type B Programme Manager Steve Chester, said the Gemini fleet was brought back into service specifically for its role in this project. “The launch of shipments is a major milestone for the NDA Site Decommissioning and National Waste Management Strategy, its Nuclear Material Transfer Programme, and for NWS’s Type B Packaging Programme. Teamwork proved vital to the success of the project with an integrated programme/ project management strategic approach adopted, led by NWS, with Sellafield, Magnox and ORANO NPS, to manage risk and respective site interfaces, and drive efficiencies wherever possible.”

Darren Holt, NWS Gemini Project Manager, said: “It is testament to the collaborative efforts and professionalism of all three site teams culminating in the successful return to service of the TN Gemini package and demonstrates the benefits of a fully integrated and collaborative approach to delivery.”

Harwell in Oxfordshire was established in 1946 as the Atomic Energy Research Establishment (AERE) on the site of a WW II Royal Air Force (RAF) airfield. Many research and radiochemical facilities were operated at Harwell. These included five research reactors and a number of other nuclear research facilities, as well as plutonium handling facilities, radioactive laboratories, nuclear waste treatment and storage facilities. In 1954 AERE was incorporated into the newly formed United Kingdom Atomic Energy Authority (UKAEA), which was part of the Department of Trade and Industry.

During the 1970s the slowdown of the nuclear energy programme reduced demand for the work being done by the UKAEA, which was required to divert its research effort to the solving of scientific problems for industry by providing paid consultancy or services. UKAEA was divided in the early 1990s, retaining ownership of all land and infrastructure and of all nuclear facilities and businesses directly related to nuclear power. The remainder was privatised as AEA Technology and floated on the London Stock Exchange.

In 2009, part of the campus, the remaining nuclear licensed site, passed to NDA and is being decommissioned by Research Sites Restoration Limited (from 2015 part of Magnox Ltd), on their behalf. Today, Harwell is a multi-occupancy and multi-ownership site, part of which is undergoing decommissioning with a view to redevelopment.