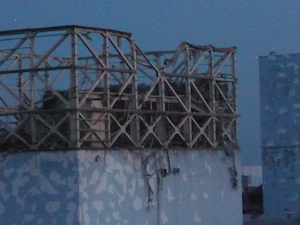 University of Sheffield researchers have developed a new simulation of the most dangerous radioactive fuel debris remaining in the nuclear reactors at Japan’s Fukushima Daiichi nuclear power plant.

Simulant material could help officials learn more about the dangerous debris for the first time and design safe strategies for its removal. Removal and safe storage of the debris is thought to be one of the biggest challenges in the decommissioning process, almost 11 years after the disaster.

In the study, published in Nature Materials Degradation, researchers led by Professor Claire Corkhill from the University’s Department of Materials Science and Engineering in collaboration with the Swiss Light Source have developed a simulation of the extremely radioactive fuel debris inside Fukushima’s damaged reactors. It is the first study to evaluate the whereabouts of plutonium in the fuel debris.

The simulant material can now be used by officials to learn more about the chemical make-up and mechanical properties of the debris for the first time and help them to design safe strategies for its removal. As long as it remains there, the fuel material requires cooling, generating millions of cubic metres of radioactive water.

A robotic survey of the debris in Fukushima Daiichi reactor 1 has now been launched by the Tokyo Electric Power Company, and together with the new simulant material developed by the Sheffield researchers, could be used to better understand the debris left behind by the disaster.

Professor Claire Corkhill, Chair in Nuclear Material Degradation at the University of Sheffield, said: “Using what is known about the materials within the Fukushima reactors - for example, the fuel, cladding and concrete type, we were able to develop a recipe for the fuel debris.

“We heated it to the extremely high temperatures experienced during the accident, producing a low-radioactivity version of what we think the fuel debris is really like. In actual fact, it is not too dissimilar from the material generated during the Chernobyl accident. Investigating this material with extremely bright microscopes has allowed us to understand the potential distribution of plutonium within the fuel, which is of utmost importance to the retrieval operations.”

The simulant material has been developed as part of an Engineering and Physical Sciences Research Council (EPSRC) funded project in collaboration with the Japan Atomic Energy Agency, through the UK-Japan civil nuclear partnership research scheme. It used one of the brightest microscopes in the world, the Swiss Light Source, to study the simulant materials.