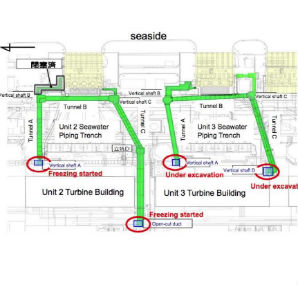 TEPCO has admitted that it has having problems with freezing contaminated water flowing in trenches between the reactor buildings and turbine buildings of Fukushima Daiichi units 2 &3 , but says that these difficulties are unrelated to its work to freeze soil surrounding them to create an 'ice wall', which is proceeding toward completion in 2015.

The water in the trenches is groundwater and cooling water that has leaked out of the reactor buildings' basements through holes and penetrations, and that has become contaminated after coming into contact with nuclear material or other contaminated water. TEPCO estimated in February that there was approximately 5000t of accumulated water in unit 2 trenches, and 6000t in unit 3 trenches.

It started efforts to freeze water in the trenches in April to remove it without causing additional water to flow out of the buildings. But because the water flows in and out of the trenches because of water pumping operations, it has proved 'exceptionally difficult' to freeze, TEPCO said. This was despite increasing the flow of coolant, adding ice and dry ice to the trench water to lower its temperature.

TEPCO said that alternative approaches to removing the water are being actively explored, including upgrading the system's cooling capacity, suppressing water flow, installing additional 'packers' - nylon bags filled with cement, and filling the space with grout or other materials.

At Fukushima Daiichi unit 1, TEPCO is planning to remove the temporary cover erected in 2011. It says that rubble on the operating floor impedes the safe removal of fuel and efforts to decommission the plant. The cover will be removed so a remote-controlled overhead crane can be installed to remove debris, using techniques recently employed at unit 3.

First, the cover's roof panels will be removed, then wall panels, then the frame, then side beams, which will then be put back after installing a windbreak. Small debris and dust will be sucked up and cleared before cover dismantling starts. The top of the building will be treated with an anti-scattering agent to reduce the risk of escape of radioactive substances. Rubble will be sprinkled with water to keep down dust, and the water will be vacuumed, treated and stored.

Fuel is planned to be removed starting in 2017. According to a 2013 planning document, fuel removal would not start until a new cover was installed.

In other news, researchers have successfully demonstrated the use of submerged robots to search for leaks in the reactors' primary containment vessels (PCVs). A swimming robot (Gengo ROV) and a crawling robot (Trydiver), both developed by Hitachi GE, surveyed penetrations inside the Fukushima Daiichi unit 2 torus. They used cameras and a supersonic sonar system monitoring the movement of tracers (clay particles). The devices successfully detected the absence of flow in the target locations using both methods. However, the machines stirred up sediments that impaired visibility.