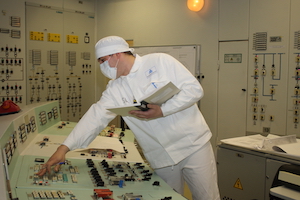 Unloading of nuclear fuel has begun from the RBMK-1000 reactor at unit 2 of the Leningrad NPP, which was shut down in November 2020 after 45 years of operation. The milestone initiates a key stage in preparation for its decommissioning, Leningrad NPP reported on 1 October.

All work with nuclear fuel is carried out in strict accordance with the requirements of federal rules and regulations, the plant noted. The complete unloading of all 1685 used fuel assemblies will be completed in 2023.

Nuclear fuel is discharged into near-reactor ponds. Some of the assemblies will then be moved to the station storage and later removed from the Leningrad power plant site to a regional storage facility. Other fuel assemblies, burned out less than half of the design depth, will be sent for afterburning in the operating reactors at Leningrad 3 and 4.

“Currently, the operating reactors are post-burning unburned fuel assemblies of unit 1, which was shut down in 2018 to prepare for decommissioning, Deputy Chief Engineer Igor Lozhnikov said. “The economic efficiency of this approach for two power units makes savings on the purchase of 1000 fresh fuel assemblies and, accordingly, saves on handling the same amount of used fuel assemblies."

At Leningrad 1, routine operations are under way to prepare for decommissioning.

Photo: Fuel is being unloaded from Lengingrad 2 (Photo credit: Rosenergoatom)