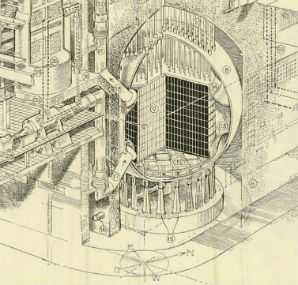 Engineering consultancy Frazer-Nash has been appointed by Magnox to perform concept and detailed design of new structural steel supports for the reactor gas ducts at Bradwell nuclear power station.

The work involves applying advanced methods for design and seismic structural analysis, and includes design of the connections between the supports and the ducts and the surrounding civil structure. The new supports complement the existing supports and will ensure confidence that the gas ducts can withstand a design basis seismic event during the next 100 years without damage to the reactors resulting in radiological release.

Peter Frost, Business Manager at Frazer-Nash, said: "We are really proud to be working with Magnox on this assessment project, especially as it will contribute to the safety of the site. We've established a strong relationship with Magnox since 2003 and have been involved in many of their projects including the life extension of the nuclear reactor at Oldbury before it was finally decommissioned in 2012, so we're delighted to be able to continue work with the organisation on projects such as these."

The original purpose of the gas ducts was containment of the reactor gas and to provide the circuit to transfer the gas to and from the boilers. Following shutdown of the Bradwell reactors, the gas ducts need to continue to provide containment until final site clearance towards the end of the 21st Century.

There are 24 different ducts at Bradwell, comprising upper and lower structures. An overall support design for each will be created which can be rolled out over the whole system. The contract will include assessment of the ducts and design of the new support structures focussing on the beams and steelwork and the bolted joints to concrete.

Frazer-Nash's role is to undertake design and analysis activities to demonstrate that the integrity of the gas ducts will not be compromised over the required design life. To undertake the work, Frazer-Nash has deployed a team of SQEP engineers with experience of designing for the harsh environments found in civil nuclear; a particular challenge has been breaking the design into sub-assemblies which are suitably sized for entry through the confined spaces of the passageways within the reactor buildings. Structural analysis (including seismic assessment) is being performed using complex FEA (ANSYS and Abaqus). Code assessment is being performed to European Codes (BS EN 1993-1 for the new steelwork and BS EN 13480 for existing duct work) and American Concrete Institute Codes (ACI 349-06 for the connection to the concrete walls).

Frazer-Nash is an independent systems and engineering technology consultancy, employing over 500 permanent staff in the UK and Australia.

Picture: Detail of a cutaway drawing of the Bradwell gas-cooled reactor structure, showing the graphite core (9), and inlet (17) and outlet (18) ducts. The complete scanned drawing is available for purchase: www.neimagazine.com/mediapacks