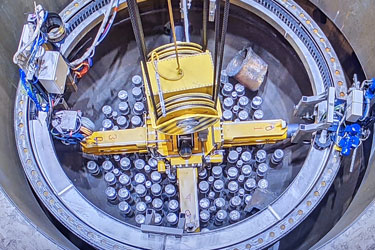 The in-situ part of the dismantling of the first reactor pressure vessel (RPV) of a commercially operated nuclear power plant in Sweden has been completed at the Barsebäck site, NUKEM Technologies announced on 6 December.

The Barsebäck plant operated two 600MWe boiling water reacors (BWRs). The RPV from unit 1 was thermally cut into rings with a height between 0.9 and 1.8 metres, the "barrel shells". Each of these vessel sections weighs 12 to 24 tonnes. In this way, the entire RPV was pre-cut step by step from top to bottom into 13 rings plus the lower part of the reactor. The pre-cut rings were moved to a post-segmentation zone and then cut into manageable pieces, which were packed into special containers. A total of 430 tonnes were dismantled.

In 2019, the consortium UNNU, NUKEM Technologies (part of Rosatom) and Uniper Anlagenservice, was awarded a contract for distmantling two RPVs in Oskarshamn and two in Barsebäck. The dismantling will be carried out consecutively, starting in Barsebäck and then continuing to Oskarshamn, to ensure significant synergy effects in project implementation. During the last 13 months, the equipment has been constantly optimised so that the other three RPVs can be dismantled even more efficiently and safely. The thermal cutting technology used has already been employed in several decommissioning projects in Germany. The entire consortium project is scheduled to be completed in Oskarshamn in 2024.

"This is an important milestone for the project and our company, proving the efficiency of thermal cutting technology for dismantling reactor pressure vessels. I am confident that with the proven technology, a strong project team and using all the lessons learned from the Barsebäck plant, we will dismantle the next three reactor pressure vessels in the contracted time with high quality and safety standards," said NUKEM Managing Director Sergey Molodtsov.

“The dismantling of a nuclear reactor vessel in Sweden was the first, and what is important, a successful experience for Rosatom in dismantling commercial BWR reactors. We look forward to starting work on the next units. This example clearly shows to the world that decommissioning is no longer a problem and is becoming a routine and cost-effective process,” said Vadim Sukhikh, Chairman of the Supervisory Board of NUKEM and head of the industry decommissioning Integrator.