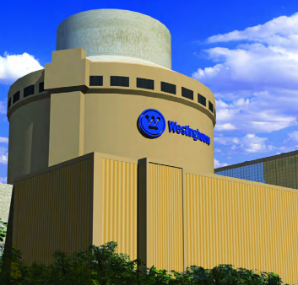 Westinghouse plans to build three AP1000s (3.4 GWe) at Moorside, the nuclear new-build site next to Sellafield in the UK, with the first coming online in 2024, it said, in an announcement that its corporate parent Toshiba has decided in principle to buy a controlling stake in NuGen for £102 million (EUR 122).

The deal means that Toshiba would take a controlling interest in the nuclear new-build consortium by buying out the complete stake of former joint venture partner Iberdrola for £85 million, as previously reported, but also 10% of the stake of GDF Suez (worth a further £17 million, according to Simon Marshall, Westinghouse AP1000 head.)

Although Westinghouse would supply the reactor, operating it would be down to GDF Suez, which owns Electrabel, the utility that runs Belgium's seven nuclear reactors at the Doel and Tihange sites, to bring its operations expertise and model for running NuGen. "NuGen itself has to be established as a standalone utility company," Marshall said.

Marshall said that the principal condition in closing the deal now, which he predicted could be finished 'before June' 2014, was negotiation with the Nuclear Decommissioning Authority about extending the option on the Moorside land. The option held by NuGen currently expires in October 2014; Toshiba would not be ready to exercise that option, when it makes a final investment decision, until the end of 2018, just before it would plan to start construction on the first unit, he said.

Marshall said that Westinghouse would restart work completing the regulatory approval of the generic AP1000 design, a process placed that was placed on hold in 2011. He predicted it could take two years to close the remaining 51 outstanding issues. Other work up to 2018 includes acquiring the site licence, the development consent order, and other required permits and permissions to start work. After that, site preparation would take two years, and site construction another four. Marshall said that construction of units two and three would likely follow at one-year intervals.

Apart from taking a 'real interest' in NuGen, Toshiba would also likely supply its turbogenerator systems and services to the plants, Marshall said.

He also said that Westinghouse has previously announced that fuel for any European AP1000s -- including these -- would be manufactured at its Springfields UK factory. The factory makes fuel for the UK's fleet of advanced gas-cooled reactors, but these are likely to shut down by 2030. This deal provides added assurance to the factory's 600 employees of long-term jobs.

Another tricky issue is the grid connection. No transmission system currently exists to transfer power generated at Moorside to the electricity grid, and site access is restricted by the Lake District National Park. National Grid's Strategic Options report from October 2012 for the North West Coast Connections Project lays out two possible options: onshore routes to the north of Moorside following the path of existing low voltage power lines, or following existing power lines to the south, or offshore through the Irish Sea and across Morecombe Bay. National Grid said once its plans are further developed it would plan to consult with residents.