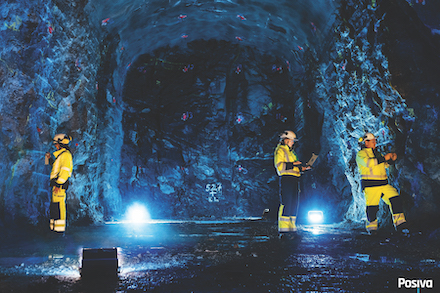 Finland’s radioactive waste management company, Posiva Oy, said on 30 December that it had submitted its application to the Ministry of Economic Affairs and Employment (MEAE) for an operating licence for the used fuel encapsulation plant and final disposal facility currently under construction at Olkiluoto. MEAE said Posiva is applying for an operating licence for a period from March 2024 to the end of 2070.

Posiva has been preparing for the disposal of used nuclear fuel for more than 40 years. Its encapsulation plant is located above ground, and the fuel repository of underground disposal facility is located in the bedrock at a depth of approximately 400-430 metres, MEAE noted.

According to the application, most of the used nuclear fuel of Posiva’s owners — Teollisuuden Voima Oyj’s Olkiluoto NPP and Fortum Power and Heat Oy’s Loviisa NPP — would be disposed of in the facility between 2024 and 2070. The disposal of all the used nuclear fuel is expected to be completed by the late 2120s.

According to Posiva's CEO and President, Janne Mokka, the submittal of the application for the operating licence is a significant milestone for the entire emission-free and climate-smart nuclear energy sector. “We can all take pride in the long-term and responsible approach of the various parties in the use of nuclear energy in Finland with Posiva now having the capability to launch the first, demonstrably safe final disposal operation of used fuel in the world here in Olkiluoto. We have a solution,” he said.

Posiva said the multi-disciplinary project has required world-class expertise, and still does. Tiina Jalonen, Senior Vice President, Development, for Posiva, said that the future outlook is now promising. “In addition to engaging in the safe operational implementation of final disposal in the future, we are developing our concept further towards a more industrial solution and support the vision of our subsidiary Posiva Solutions of turning the expertise gained during the project into a successful Finnish export product,” she noted.