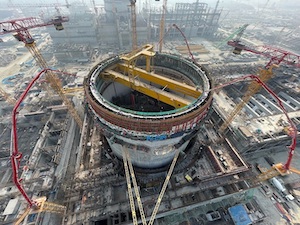 Rosatom’s engineering division, ASE, said on 27 December that concreting of the fifth tier of the inner containment (VZO) of the reactor building had been completed on 24 December at unit 2 of the Rooppur nuclear power plant under construction in Bangladesh.

During 23 hours of continuous concreting, specialists of Trest RossSEM laid 850 cubic metres of self-compacting concrete mixture. The fifth tier completes the cylindrical part of the VZO, which is one of the main elements of the reactor safety system, preventing the release of radioactive substances into the environment. In the future, the dome section will be installed. At present, the elements of the domed part of the shell are being manufactured. The installation of the metal structures of the VZO dome is planned to be carried out in the first half of 2022.

“The concreting of the fifth tier of the inner containment shell from the elevation of +38.180 to +43.400 metres was completed much earlier than the deadline. This is another proof of the high level of professionalism of the employees of the RosSEM Trust branch in Bangladesh and a good indicator of the close-knit work of the entire team at the construction site," said Alexei Deriy, Vice President of ASE and Director of the Rooppur NPP Construction Project.

The Rooppur plant is being built by Rosatom on the eastern bank of the Ganges River in Bangladesh’s Pabna district about 160 km northwest of the capital city of Dhaka. It will comprise two VVER-1200 reactors: Rooppur 1 is scheduled to start operating 2023, followed by Rooppur 2 in 2024.

Photo: Concreting of the fifth tier of the inner containment of the unit 2 reactor building at Rooppur in Bangladesh has been completed (Photo: Rosatom)