Final shutdown for UK’s Hunterston B 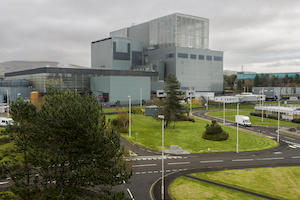 The Unit B2 (Reactor 4) of the Hunterston NPP in North Ayrshire, Scotland, was permanently shut down on 7 January after generating electricity for 46 years.

Hunterston B1 (Reactor 3) had been closed in November 2021. In 2012, plant owner EDF Energy extended the plant's original 25-year lifespan by more than 20 years to 2023, with a two-year window either side of that date.

Both 490MWe advanced gas-cooled reactor (AGR) units were taken offline in 2018 after cracks in their graphite cores were identified during routine inspections. In August 2020, the UK Office for Nuclear Regulation (ONR) approved the restart of B2 in August 2020 followed by  B1 in September 2020.

The Hunterston A plant, which is already closed, comprised two 180MWe Magnox reactors which began operation in 1964. Reactor 2 shut down in December 1989 and Reactor 1 in March 1990. Construction of Hunterston B began in 1968 and reactors 3 and 4 began operating in February 1976 and March 1977. The site will now begin a three-year process of removing the used fuel, which will be sent to Sellafield for reprocessing. The site will then be transferred to the Nuclear Decommissioning Authority so that its Magnox subsidiary can continue with the dismantling. During defuelling, 125 of the 480 employees will either retire or be redeployed to other sites.

Station director Paul Forrest said: "It was originally thought Hunterston B would run for 25 years but investment in the plant and the people who work here mean we've been able to safely extend that to 46 years."

The cracks were first identified in two graphite bricks in reactor 4 in 2014. By 2018, a total of 350 bricks had been affected although ONR subsequently gave permission to continue operation at much greater numbers. Each reactor core comprises 3000 bricks which form vertical channels for nuclear fuel and control rods to slide in and out. There was concern that too many cracks, combined with a rare seismic event, could affect the structural integrity of the core and prevent it being shut down in an emergency.

When operational, the two reactors at Hunterston B provided enough base-load of electricity to power 1.8 million homes. Its closure will could mean an increased reliance in the short-term on fossil fuel or imported energy sources but a bidding round is under way to significantly increase Scotland's offshore wind capacity. The Scottish government has long been opposed to building new nuclear power stations. Nuclear energy will still be generated in Scotland at the newer Torness power station in East Lothian. However, in December, EDF Energy announced that Torness would close two years earlier than planned in 2028 because of similar problems with graphite cracks.

Louise Gilmour, of the GMB union, said it should not be the beginning of the end for nuclear power in Scotland. "This is a viable low-carbon industry that can help create and sustain the domestic energy production and employment opportunities we need to play our part in confronting the climate crisis,” she noted.

On the other hand, Lang Banks, from WWF Scotland, said: "Thankfully Scotland has massively grown its renewable power generating capacity which means we'll no longer need the electricity from this increasingly unreliable nuclear power plant. As the expensive and hazardous job of cleaning up the radioactive legacy Hunterston leaves in its wake now begins, Scotland must press on with plans to harness more clean, renewable energy."

A Scottish government spokesperson confirmed its opposition to the building of new nuclear power plants in Scotland under current technologies. "Significant growth in renewables, storage, hydrogen and carbon capture provide the best pathway to net zero by 2045, and will deliver the decarbonisation we need to see across industry, heat and transport. We recognise that planning will be crucial to ensure that economic and social opportunities from the transition are not missed."

The UK’s remaining seven AGRs are expected to end their operational lives by 2030. Sama Bilbao y León, director general of World Nuclear Association said the UK “needs to move forward rapidly with plans for new reactor construction to expand the role of nuclear in its generation mix to meet its net-zero goals. The current energy crisis, driven by sky-rocketing gas prices, shows that a reliance on imported fossil fuels is not only bad for the environment, it is also too risky for the economy. The UK needs to invest in new nuclear capacity to provide a reliable electricity supply at an affordable price."

Hunterston B in Scotland has been permanently shut down (Photo credit: EDF Energy)